A bit late now, but I thought I’d mention two exciting new techniques I learned  from the FoodWishes.com blog, where I found a nice Cabbage Roll recipe.

Now, I don’t know if I’d recreate the cabbage rolls exactly in future.  As a recipe, I’d give this maybe a three and a half out of five.  I found them a bit dry, and call me Jewish, but I like a bit of sweet along with the tomato.

Okay, I give up and will admit here in public:  my “secret sauce” for cabbage rolls is the same as my pickled brisket “secret sauce”:  equal parts ketchup and ginger ale.  GASP!  No, seriously, it tastes yummy!

For pickled brisket, add raisins so my mother can joke that it looks like the (GASP!) ham she used to make for really special occasions.  For meatballs, add Asian-sliced multicoloured bell peppers.  For cabbage rolls, add tinned diced tomato and leftover bits of cabbage.   Yum!  And easy!

However, the insides were quite flavourful (if a bit dry, as I said; maybe I shouldn’t have left out all the butter from the original recipe!) and way more peppery than I usually make them.  I’d definitely include tons of parsley again, also.

I’m happy I forced myself to sit through his video, however.  I thought it would be dull but I did manage to pick up these two techniques that made the process much easier.

The meat technique is basically – push the meat down firmly into the bowl so it’s well-packed.  Then, just cut it up like a clock face, according to however-many rolls you want to make: 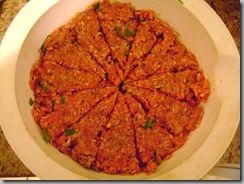 This is very basic.  Probably everybody knows this already.  But I didn’t, and it was a revelation:  rather than having too many leaves or too few or fiddling to have it come out even, just portion it all before you begin!  I ended up using this technique a couple of times for other things during my Yom Tov cooking, and could imagine doing it for stuff like blintzes, etc.

Anything where you have to divide something evenly for whatever reason, I guess!

The other technique he demonstrated is the cabbage-spine technique.  Less easily generalized to other cooking, but oh-so-important to cabbage rolls!  I hate the spines of cabbages!  They’re alwyas getting in the way!  They make it hard to roll and they’re annoying to eat. Okay, probably everybody knows this already.  Whatever.  It’s new to me.  I’m glad I watched the video; turns out there are still things I can learn about food.

Yom Tov was amazing, food-wise.  Definitely my best ever, best-prepared ever.  Oh, except for the leek soup spilling on Friday so we had no soup Saturday night.  Turned out the GIANT HUMUNGO LASAGNA and the bazillion desserts more than made up for it.