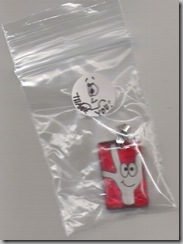 Over Shabbos, Elisheva Chaya was giving me a hard time because I’m not only learning ASL, I’m practicing signing at home.  And she finally blew up and started yelling that I was just waving my hands around, and why was I learning ASL, and I was never going to meet any deaf people anyway.

She does the same thing when I practice Hebrew, by the way.  “Mommy, we’re not Israeli.  You don’t speak Hebrew.”

It’s true.  I don’t.  My Hebrew is laughable, my accent is bad, and I repeatedly make kindergarten-level mistakes.

But if I’m speaking to somebody and it’s clear that they are learning English, and they are using the wrong words and speaking with a weird accent, I think I would be NICER and KINDER to them than to somebody I think is just dumb or stupid.

So I figure my lousy accent will protect me if and when I’m in Israel again.  It’s hard to imagine NICE and KIND from Israelis (like the customer-service agent who yelled at me in the bus terminal for looking for – gasp – a bus!  and having the nerve to ask her twice!), but still.  I think people are more likely to take pity on me than assume I’m an idiot.

I realize I’m a beginner, and while I have tons of vocabulary, I have zero ability to carry on a conversation.  And no, I’m not doing it because anybody in my family is deaf, or to unlock the amazing world of Deaf culture, though there is a new deaf yeshiva in town and our shul is looking for host families the boys can stay with over Shabbos.  Which would be cool, for YM and for our whole family.

That’s not why I’m taking it.  So I didn’t really have an answer for her, except to point out that my father, her Zeidy, spent years learning Portuguese and never actually got to Portugal.  He loved languages.  He loved sitting and staring at tables of verbs and conjugating and having the same tedious “getting to know you” conversation over and over in Hebrew, Yiddish, Portuguese and Spanish.  (the four languages he studied actively in the past decade or so)

I’m taking it because it’s fun, and a challenge.  And because maybe I’ll meet a deaf person, I threw in.  ASL is the third most common language in North America, so there is a chance of that…

Fast forward to today, down at the Riverdale Farm / Parliament Street Fall Fair.  A table off Parliament had ASL alphabet t-shirts for kids, but they were overpriced and low quality, so I was about to walk away when I saw these pendants.

I smiled at the woman selling them to catch her attention.

Pointed at the necklace I wanted, though I could have signed “red.”  She pointed out a small flaw, and picked up the one next to it.

I signed, “beautiful.”  (bit of an overstatement, but “pretty” is the same sign , and I thought “nice” would sound too faint)

Friends of my mother happened along during this transaction, and I happily translated the pendant, which shows the I LOVE YOU sign, with a happy face.

And then, my vocabulary ran out.  I handed over the money, then remembered I needed not the ten-dollar bill she was going to hand me, but change for Elisheva to catch the streetcar.   Frantically, I signed “five!”  “two!”, trying to get her to give me toonies.

She finally nodded in understanding and handed me two fives.  Sigh.  I signed “thank you,” because I don’t know the sign for, “this is the wrong denomination, my fault, I apologize for my moronic existence on this planet and every pretension I have ever made to understanding any degree of ASL.”

The hearing woman next to me, a customer, made change for one of the fives.  Drat.

I thanked her again and waved goodbye.  Walked away feeling like a moron, a kindergarten baby in the world of the deaf.

How can I LOVE YOU be horrible?  I think I will wear it to shul.