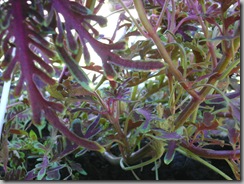 So enough about me, you ask – how are all your COLEUS???

(Caution:  the following is intended for Advanced coleus lovers ONLY!)

Yes, it’s late August and they are at their peak… well, okay, I guess they’ll peak a bit more in September, but come October, they’ll be gone and that’s it for the year.

Front-bed coleus:  these are 40 or so of the ones I divided and propagated under lights and in our windowsills over the winter.  There are five basic models, which I have grown for three years now.  They’re described here:  Meet the Coleus!  All but two of these originated from free (okay, stolen) cuttings (small ones!  nobody missed them!  I promise!).

So here they are.  Not as impressively huge as I remember them getting last year, but maybe they’ll grow a bit more still… 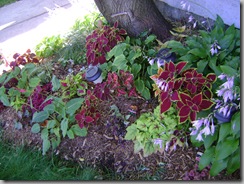 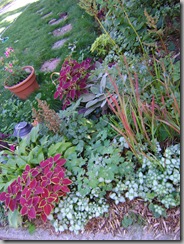 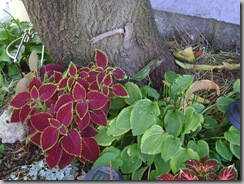 I love how rich the colours get by late summer.  Indoors, they are a pale imitation of their own colouring… sometimes in February I wonder why I’m propagating them, they’re so pale and weak.  And then, in summer, I remember.

Purchased President’s Choice “dragon-type” (molten lava?) coleus, paired with miniature encliandra fuchsia and a white-flowered gaura in a pot on a rustic wooden bench beside the house: 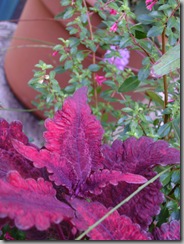 From seed:  giant green “tree” coleus!  Yerachmiel Meir said, “what’s the point of a plant if it’s green?”  Meaning why grow such a distinctive foliage plant (ie coleus) if its foliage looks like everything else in the garden.  He has a bit of a point.  The novelty of green coleus is a lot more appealing in early spring when not the entire world is green yet.

Still – it is big, especially considering it started out back in March looking like this. 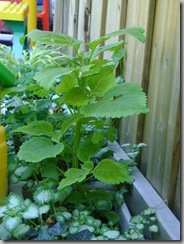 The rest of those March coleus seedlings are in a pot beside the garage, by the way.  I think they look nice together, if a little rag-tag and jumbled. 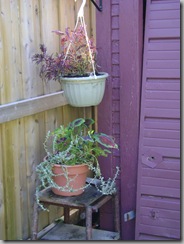 The trailing thing in the pot is helichrysum, not coleus!  It doesn’t love the shade, and I’ve just turned it around so it looks a little sparse.  Above the coleus pot is a hanging coleus I call “fingers” (it didn’t have a tag when I bought it this year).  It was one huge overflowing plant, but I just divided it today into two separate pots, on either side of the garage.  Hopefully, both will thrive.

This one is definitely a keeper – really intriguing both from a distance and close-up (see photo at the very top of this post for a way close up “jungle” shot).  I don’t love the colour, though – maybe it wants a little more sun?  We’ll see – the new one on the right of the garage gets a lot more sun than the existing one on the left. 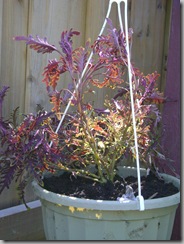 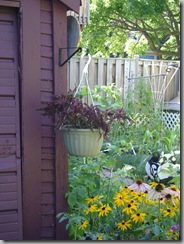 Here’s a close-up of the new Bi Polar By Golly coleus I’ve already complained about.  It’s a little freckly and bedraggled.  Hopefully, it’ll fill in a bit before we get frost. 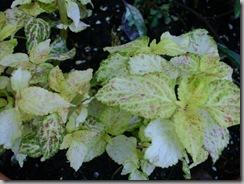 Ooooh – speaking of coleus from seed, here are the three surviving “Black Dragon” seedlings, also from March!  I thought I had just-sprouted pics somewhere, but I guess not.  Anyway, here they are.  I think they’re lovely, and I even like the contrast with the mini hosta they’re planted with.

Note to self:  must replant the hosta higher up in the pot with good drainage if it is to survive the winter.  It barely made it through last year, as the pot had a thick layer of ice on top of the soil a month after the rest of the yard had thawed. 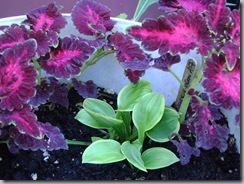 Here’s an impulsively-bought coleus from my trip to Humber Nursery back in May with my mother.  It’s called Colorblaze Royal Glissade, and it’s a full-sun coleus.  It’s just now starting to show its distinctive yellowish-green speckles on the leaf tops.  I think it’s gorgeous.  I bought it because it already had a long hangy-down “arm” coming off it and I knew it would be instantly gorgeous in a pot.  Boy, was I right – another keeper for next year! 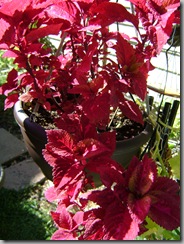 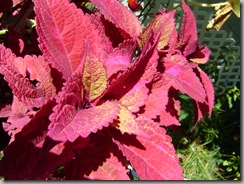 Finally, here’s my “tree coleus,” also from Humber, I think.  It’s called “Jingles.”  See how woody the trunk has gotten?  I planted lots of curly parsley around the base, which is a lovely shade of green and beautiful with the coleus foliage.  However, raccoons scrambled it up and killed one of the parsleys two months ago and I never got around to replanting.  :-(

Also, the “tree” leans at a distinctive angle that to me looks rakish and windswept, but to anyone else, probably just looks dumb.  A plant only its mother could love! 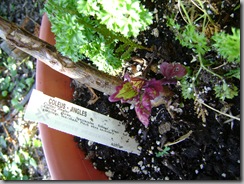 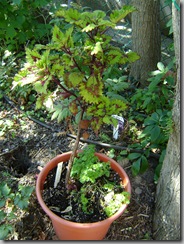 So that’s Jennifer’s world of coleus for today!!!