Quick! Find this bochur a shidduch! 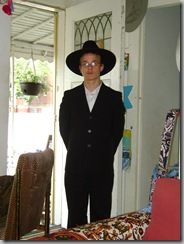 My, but he sure does look “official” in the hat & jacket (thanks to Sears for the suit (only $75!), and to my mother for springing for the hat as an early birthday gift for him)… this was the only picture I could get of him where he wasn’t smirking.

Actually,  I did take a close-up that looked a little good when I saw it on the camera, but when we imported it into the computer, we noticed a wasp buzzing beside his lip.  I was like, “didn’t you notice it there???”

He hadn’t.  Ruined a perfectly good shot, too:

Despite the fact that I shudder now every time I hear the word “green,” I took the littles down to the Green Toronto Festival at Yonge and Dundas Square, just for something to do.

Sara wanted to do BuskerFest instead, so she met us at Queen & Yonge and took Naomi while I headed up to check out the exhibits alone with Gavriel Zev.

Fun fun fun had by BOTH of us!  Boy, I sure don’t get enough one-on-one time with that kid, and boy, did he have a great time.

While I was checking out the green vendors and swag (two free wubbas, a lunch bag, a bunch of pins), he got his hand painted, played with a couple of music thingies, checked out some drummers, breakdancers, and generally just people-watched.

For the hand painting, when I pulled up the carriage, the clown/lady asked how old he was.  I said, “two.”  She hesitated.  I said, joking, “why, is there a minimum?”  She said, “yes… two.”  Apparently, their skin is too sensitive before that for face paints.  Anyway, it is officially the 10th of Elul, making him OFFICIALLY 24 months tomorrow.  If that isn’t two, I don’t know what is.

(however, his birthday will be held as usual on the 11th of Tishrei, exactly one month from tomorrow… exactly one day after Yom Kippur:  oy!)

Anyway, he passed for two.  She didn’t card him.

Speaking of carding:  “Note to self:  Get health cards and birth certificates back from Elisheva!”  Haven’t seen them since I handed them to their grandmother in Calgary.

Supper:  Fresh corn and soup at my mother’s house!  Not sick of the corn just yet…