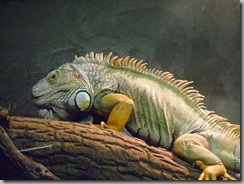 Add this one to the list of Places to Take Kids of All Ages with Very Diverse Interests:  Reptilia.

I’ve been a Reptilia fan since it was free, in a tiny storefront, and Elisheva first went there for a friend’s birthday party.

A few years ago, they moved into a huge new location in Woodbridge (Vaughan?), and started charging a whole lot of money.  (currently $12 for adults, $8 for kids)

I did an article about it for the Canadian Jewish News, for a party supplement (they do birthday parties), so I got a full tour for free (I thought in return for such a great article, they should have given me a free pass for the whole family or something, but I did bring Elisheva along to take a look around – a photo of her in the bathroom got published in the CJN!).

Anyhow, I’ve been reluctant to go and actually pay money, but the new facility really is leaps and bounds better than the old one, which wasn’t really anything.

So today I had a 2-for-1 coupon, and YM got in free.  Elisheva decided to have a day of nothing and stayed home, which is a shame, because she would have loved it.

The littles both found things of interest:  GZ was mostly into turtles, Naomi was more all over the place.  YM found enough science stuff and cool critters to keep him amply entertained as well.

We only stayed for one show, but shows are offered every couple of hours (I assume based on how busy they are), and the one we were in allowed close-up viewing and touching of three reptiles:  a turtle, monitor and baby alligator (just about GZ’s age).

I thought the monitor was too similar (lizardy) to the alligator, and that they should have brought out a snake, but anyway, the kids were entertained.  When I told Naomi she’d have a chance to touch the animals, she said she wasn’t going to, which I said was perfectly okay.  But then when the presenter came around with the critters, she reached out fearlessly and patted them (except the turtle, which he showed but warned us not to touch, because it can snap).

I was incredibly impressed when the presenter referred to his PhD in herpetology.  I know somebody has to run a place like this, but it convinced me that the animals were being well-cared-for by extremely knowledgeable staff.

That did mean his presentation was a little more detailed than the littles would have enjoyed; their attention wandered pretty early on before he got into the actual animal viewing.  But for YM and myself, I’m way happier with somebody who’s “overeducated” than with some teenager hired for the summer to wave the animals around and do party tricks with them.

Anyway, fun times had by all, followed by My Zeidy’s Pizza in the park.  Worth the cost of admission?  Well, I paid less than $20 for all four of us.  If I’d had to pay full price… maybe.  Maybe as a once-a-year outing.  Or a “bring-Bubby-along-and-see-if-she-pays” excursion.  If we invite my mother, usually she ends up paying.  I don’t plan it that way, it just happens.

Yesterday, we did Science Centre with Abigail and our expiring-on-Jun 30th library passes, and on Monday, it was Pioneer Village, in the off-and-on rain.  All 4 kids came both days, but Elisheva starts work for the first time ever tomorrow, so I indulged her “do-nothing day” though about 4:00 she admitted she was very, VERY bored, and went to do some gardening for my mother.

And that’s our week so far.

Supper is a hopeless morass of unremembered nondescript FOOD.

But tonight we had lovely frozen thick rice noodles, crispy-fried and served with a stir-fry of garden peas, onions, red pepper and chicken in a peanut-butter sauce.  Mmm, mmm, mmm.

Outdid myself once again!