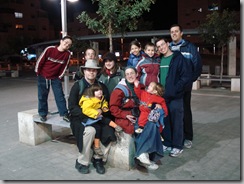 Just found this… the only picture of all of us taken in Israel.  We met Yehuda, an old friend of mine, for pizza one evening in Beit Shemesh.   It was really too cold to eat pizza outside (see how bundled up Elisheva is?).  They didn’t invite us in, even just to see their apartment, and his wife didn’t look or act like she really wanted company.

Didn’t help that we showed up super-late from Yerushalayim, like 7:00 or something.  And all my kids were tired, crabby and hungry, plus worn-out from the bus ride, which sounded like it would be nothing much, but was actually quite a long way to commute.

And then they were stuck in this not-very-interesting plaza with kids we don’t know who aren’t really the same age, and, well… it was not the best evening.  I didn’t realize at the time, but it was my last night in Israel - Tuesday.

The pizza wasn’t even very good.

It was nice to reconnect, though we were never that good friends (he did drive me to U of T quite a bit, though!).  It was nice to speak English, and it was amazing having our own personal tour guide along the highway.  BUT I wore the Ergo instead of the stroller and gripping the handhold for dear life as the bus careened over mountains and through astonishing Biblical valleys shrouded in total darkness was extremely painful and not very fun.

The way back to Yerushalayim was a lot less stressful.  We had the bus basically to ourselves, and an assortment of tickets and whatnot… easy.

Thinking more about aliyah – someday.  Partly because of a talk Chana Veffer gave last week at the ladies’ Shalosh Seudos.  (they’re moving back there for good in August!)

Except... here’s my dumb hesitation:  the garden.

Nobody has a garden in Israel - everybody lives in apartments.

Is that a terrible thing to even hesitate over?

So I emailed him tonight asking if he could maybe set my mind at ease by letting me know if there is anywhere nice with English olim that might be “compatible” with us (in the wild differentiation of spiritual compatibility that grows there) ... and where it is possible to have a small amount of land where things could grow.

Nothing too wild; I know somebody who’s gone off to live on a farm there, with goats.  No goats.  No wild. 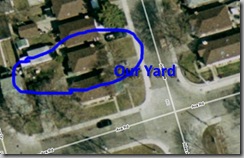 It doesn't have to be huge.  Here’s our yard right now:

Wow!  I feel so insignificant!

Sigh.  Surely, somewhere in Israel, there is, as Mary Lennox in The Secret Garden calls it, “a bit of earth,” for me to experiment with little tomato thingies.  I think knowing how to build smart, self-watering (sub-irrigated) planters super-cheap would probably come in handy there!

But still, this is just for the future, maybe far in the future.

I just noticed as I started even thinking about aliyah that my mind said STOP over this one tiny issue... I'm worse than the meraglim.