The further adventures of our rooted sweet potato!

Sweet potato vine is one of the trendiest outdoor “fill” plants for containers at the moment.

But those are “fancy” varieties with purple or lime-green foliage, and you pay a premium for them… Why bother, when you can get huge quantities of a lovely trailing green-leafed specimen for nothing?  (nothing, that is, if you choose a sweet potato that got too old and would have been composted anyway!)

Sweet potato (ipomea batatas) is closely related to morning glory (ipomea something-or-other), which is also famous for its lovely foliage.  (there’s also the climbing annual White Cypress Vine, ipomea quamoclit, that I tried to grow purely for its bizarre name, but the seed – bought, brand-new, in a home store garden centre! – never sprouted at all.  :-( )

Anyway.  Bitterness aside.  We must carry on, despite occasional gardening disappointment.

I started this in a glass of water about mid-May, so it’s taken a while, but the shoots got to about ten inches high, clambering all over the dining-room windows, so I decided it was time to move them on.

You could always just take the viney sweet potato and stuff the whole thing in a pot of soil… that would be attractive enough.

But from what I’ve read (and never tried!) the leafy, viney bits themselves are actually called “slips” and each have the potential – given the right conditions - to become an individual sweet potato plant.  WELL.  Given the choice between ONE plant and LOTS of plants, I of course chose MORE, more, MORE!!! 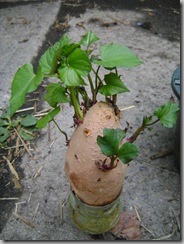 So:  starting with a rooted sweet potato, break off all the promising-looking slips.  Just snap them gently where they meet the potato.  Here, you can see a couple of bare “eyes” where I have taken off the slips.  Apparently, new slips will grow out of the potato almost ad infinitum:  we’ll see. 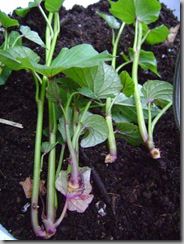 Now here are all the slips, laid out neatly in a row on the soil.  Most are long, a couple are pretty shrimpy still.

I used regular container soil mixed with homemade compost and a bit of cow manure.  Basically, what I had on hand.  If I had perlite or vermiculite left over, I would have used that.  But I don’t.  Ditto for peat.

And it’s a weird time in the season:  too late to need a whole big bag of it, but too early to find it super-cheap on sale.  So this is what I used. 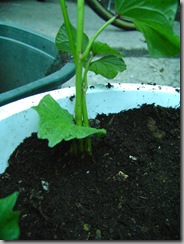 Now, stuff the slips into the soil.  You could poke a hole first, but mine were quite firm and sturdy and didn’t need help.

Here they all are, poked in a ring around the container.  I only used the biggest ones, about six or seven of them, so the container is pretty sparse at the moment.

Like everything on my blog, this is an experiment.  For experimental purposes only.  Professional driver, closed course, and all that. 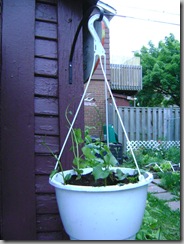 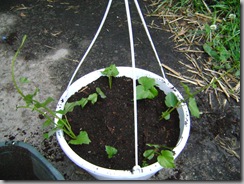 ry this in your own home garden unless you are absolutely certain you want a mangy-looking planter with what is essentially a past-its-prime food product (moldy old sweet potato) dangling in your face every time you want to haul your bike out of the garage.

Especially during a garbage strike, this planting your food waste thing can get addictive… Don’t say I didn’t warn you!!!