Three weeks and a bit later, and here’s what we’ve got… 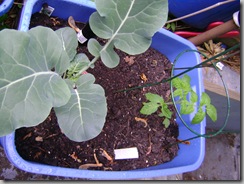 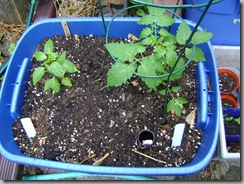 I know those tomatoes look a bit small, still, but pretty astonishing considering how runty (really just wilted little four-leaf sprigs) they were when I put them in.

BUT the broccoli is the hands-down winner of the Jawdropper Veggie Award.  I have tried to grow broccoli before, and never had nice foliage like that, or anything resembling a big conventional broc-head.  No evidence of flowering yet; it’s probably a bit early.  But it is LOVING the non-stop irrigation.

(and, okay, maybe I’m “overwatering” since this planter has yet to run out of water even once since I filled it initially, but I can’t imagine draining it would help the plants grow any better…?)

It’s not just that it’s growing better.  I bought this broccoli in a 4-pack, and distributed the “spare” 3 in ordinary soil in various locations around the garden (another one of my weird, uncontrolled plant experiments).

Two are doing “okay” but haven’t gained much size since they were planted.  One has been almost completely skeletonized by something – bugs?  slugs?

SO… life in a self-watering planter is definitely good for broccoli.  But it could be because of the nutritious, light soil mixture, or because of the constant moisture, or because it’s away from the majority of in-ground garden pests.  Or some combination – healthy plants are naturally more resistant to attack.  We’ll NEVER know… :-)))