I finally declared Composter #2 to be officially FULL.

We’ve been piling stuff in since March, and I topped it off the other day with two bags full of Starbucks grounds (they just told me to dig through the dumpster – what a privilege!).

So with YM’s help, I shovelled out all the “finished” compost in Composter #1, leaving just a bit in the bottom, and have declared it the ACTIVE composter: 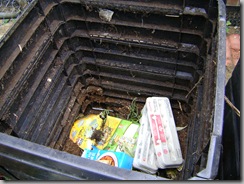 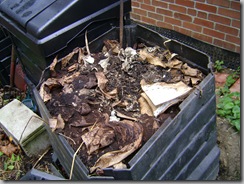 I’m hoping three months will be the average turn-around time, meaning (counting in my head:  “July…August…September”) that by this fall, I will have another bin full of compost to spread around the beds before winter.  That plus a carload of fresh horse manure rotting on the beds over the winter ought to do the trick nicely.  (I send Ted to pick it up at a local stable)

Hmm… not sure how we will transport the manure, though, now that I’m growing stuff in just about every available bin and container.  Cross that bridge when we come to it.

Here’s the garbage can of “finished” compost.  I’m using quotes because it is still very coarse.  Hopefully, useable, and most particles at least have become unrecognizable.  Plus, I  need the space in the composter. 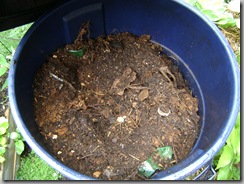 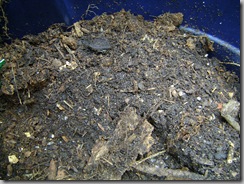 From the “every year a new and different freaky fungus” department:  this year’s freaky fungus award goes to this “button cluster” fungus brewing in Square Foot Bed #2: 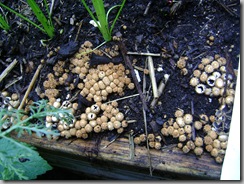 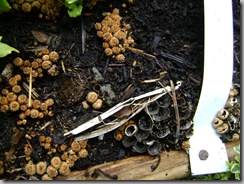 When new, they look like clumps of buttons, but then they “break” open, probably releasing a bazillion spores, and then look like dead husks, which they probably are.

These things freak me out but at least it’s not Dog Vomit Fungus again.