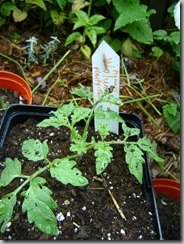 I still consider it a bit of a compliment that so many tomato “volunteers” come up each spring in and around the square foot beds.

But that doesn’t stop me from ruthlessly weeding them out… except this one.  It was the biggest and the strongest and I figure it deserves a chance.

It’s a mutt because I have no idea of its lineage – it could offer the illegitimate and nearly-inedible offspring of a fancy overbred hybrid or the delicious, juicy, resilient fruit of several generations of delightful, open-pollinated heirlooms.

That’s what I get for growing such a hodgepodge of tomatoes in my backyard.

And I don’t even know if it’s from a tomato I grew in the first place.  We dump so many tomato seeds and byproducts into the composters that it could even be from a supermarket tomato.  Ick.  (not that we eat many of those)

But still, like I said, this was the biggest and strongest so I am giving it an opportunity to show its stuff, in a pot for now until it starts getting too big for its britches.

Just noticed a slug on the plant tag YM made me.  He wrote the words at the wrong end so stuck it in the soil sharp-end up.  Didn’t deter this guy, though… 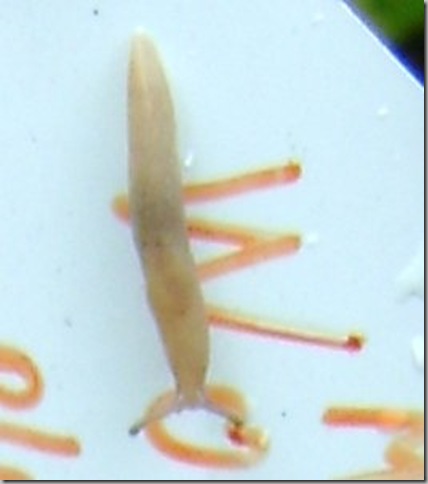