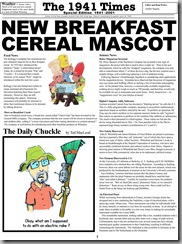 Just found this while getting everything off the sinking ship of my old Geocities site (no, I’m not putting a link here; sorry!!!)

The articles are semi-lame, semi-humourous in the “year of your birth” type of style – I thought it was quite fitting, given his love for Rice Krispies, that their mascot Snap got two new buddies, Crackle and Pop, in the year my father was born.  Hard to imagine him all alone now.

I mostly love it for the cartoon Ted did of my father.  The caption is not entirely meaningful, but the image and facial expression are so, so apt: 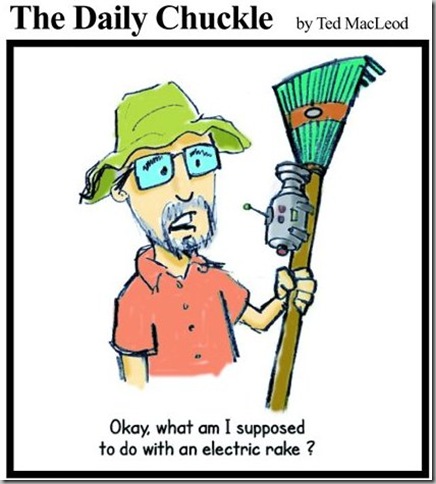 Here’s a thing about my father that everybody in his immediate family knows already:  if the cereal box showed a type of fruit, that was the “right” fruit for that cereal.  You weren’t allowed to have it with anything else.

Like this cool vintage Corn Flakes box… strawberries it is! 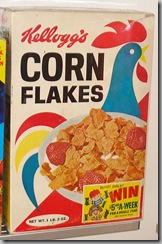 However, it did just occur to me that it’s almost ALWAYS strawberries.  Very few cereal boxes, in North America, at least, show mangoes chopped on top of cereal, or grapes, or even bananas.  If it’s Raisin Bran, there are raisins.  But mostly, the Rice Krispies, Special K, Cheerios… they all show strawberries.

But I guess the other important thing about my father is how seriously he took that “serving suggestion.”  If it didn’t show strawberries on the box, it didn’t need strawberries, or any fruit at all.  No blueberries, or even strawberries.  He would say it, just like that.  “It doesn’t need it.”  Which means it’s absolutely, unequivocally (but gently) forbidden to have it that way in his presence. 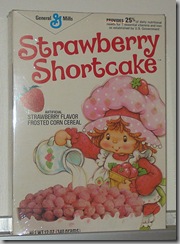 And speaking of strawberries:  this one was NOT cereal, ever.  Even if it had the word “cereal” printed on the box, we were NEVER under any circumstances allowed to eat sugar cereals as a breakfast food.  Or with milk.  Ever.  It was to be eaten, dry, as a snack.

My mother probably read it in some kind of parenting magazine, but it never made any sense to me.

Eli and I would sneak it late at night… in a bowl… and then, when nobody was looking, sneak some milk into the bowl.

The other big cereal “sneak” was waking up 15 minutes before my father so I could go downstairs and put a couple of spoonsful of sugar at the bottom of the bowl, then add cereal and be chomping away happily on my sugary milky cereal by the time he came into the kitchen, none the wiser.