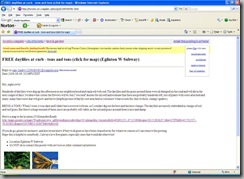 Yesterday, walking home from the playground with my mother, we saw a ton of daylilies, basically an entire yardful, chucked on the road by some landscaper.  He was putting in sod instead.

Seems entirely backwards to me, but anyway.  :-(

So I went back after Shabbos and picked up what turned out to be about 12 pots’ worth – there are maybe three good-sized roots in each pot, so 30-40 plants.

They were a real mess.  Literally in a huge pile on the road, and these are the ones I could get out 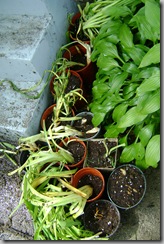 easily with no tools (I had raced out the second Shabbos was over to rescue a large plant pot we’d spotted on the way home, but decided on impulse to pick up some daylilies, too).

I didn’t want the rest of the daylilies to die, so I put a “Free Daylilies” ad on Craigslist with a map to the location but letting folks know they weren’t mine.  Two guys were there for sure last night; I think someone else might have gone as well.  Apparently, someone drove in from Brampton because he is landscaping a 60’ fence line.

I have no idea what colour these are, but have to assume they’re the standard orange ones you see everywhere.  Still.  They’re not garbage.

It annoys me to no end when people put plants in the garbage.  Somebody, somewhere, will probably want it.  One man’s weed is another man’s corsage… and so on. 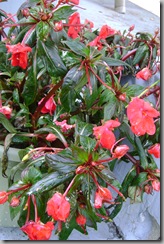 Here’s a New Guinea Impatiens I found, literally in the garbage, on the way home from the children’s garden last Wednesday.  I was drawn to it because I am hoping to find a replacement for the hanging planter I cracked.  The hanging part was broken… but the plant part wasn’t, just extremely wilted from neglect (duh, it was in the garbage). 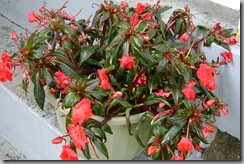