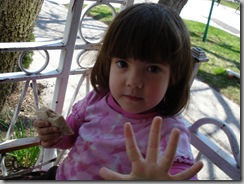 After several discussions of weaning and how she’ll be ready someday.

“I was thinking about stopping having nummies.”  (my ears perk up)

“I was thinking about stopping when I am five, or ten.  But five is a bit…” (hand gesture, made-up sign)

“Little.  Five is a bit little, so I think I will stop when I am ten.”

(note:  this picture was not taken today, but I thought it was a good & suitable demonstration of the number 5!)

She had the first of two fillings today.  The pediatric dentist our regular dentist referred us to uses sedation (Versed = midazolam), so Naomi was a) supposed to be quite woozy afterwards, and b) supposed to need one-on-one supervision all day, just in case.

I asked our neighbour Judy to take Gavriel Zev to Mrs. ViKi after we got home so I could be alone with her.

But it turned out that a) Naomi was actually more active than usual, and b) my sister Abigail was around the corner at my mother’s house.  So Abigail came for lunch and Naomi had an exciting running-around lunchtime rice party on the front lawn with her aunt (and me, closely supervising her for signs of wooziness).

They called from the dentist’s office a while ago, which was nice.  They asked how she was, and also if she remembered her appointment.  Apparently, a side-effect of the Versed in small children is that they don’t remember anything about going to the dentist at all.

Though that is creepy about young children anyway.  Like how Naomi came with me for all of my prenatal appointments when I was pregnant with Gavriel Zev.  She almost felt like a teeny little birth partner; I feel like we shared this great big huge thing.

But she won’t remember any of it.  She was only two and a half when he was born – less than two years old when we started going to the midwives.  Maybe just about the same age Gavriel Zev is now… 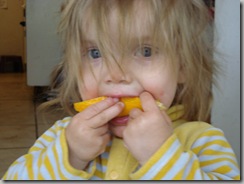 So did we share the experience, or not?  Ultimately, the memories will only be mine, except for maybe a few fleeting ideas of what a midwife’s office look like, and the creepy “birth canal baby” they gave her to play with.

(one was okay, but one had this screaming/crying facial expression that weirded me out every time I saw it…)

Nummies came in handy after the dentist, by the way.  I was worried she was still frozen and didn’t want her to start eating yet.  Plus, she was a bit weepy and droopy; she fell asleep in the car but woke up when Ted went to transfer her to the bed.

So I curled up with her on my bed and we had nummies, which we don’t usually do when it’s not sleeptime.  It’s the perfect post-dentist nutrition, really.  Not too hot or cold for sensitive teeth; doesn’t need chewing, and you have the comfort of mama close by.

We had more later after Abigail left and Gavriel Zev returned home from Mrs. ViKi’s.  Aaaaalmost a “double-header”:  two heads fast asleep on top of me, lazily lapping at their nummies but occasionally lapsing into open-mouthed, snorey silence.

Hey!  Just another thought:  at least at this point she’ll probably remember having nummies, something very few children have a memory of…