In desperation due to a growing (!) lack of garden space, I had an inspiration while pulling weeds along the neighbours’ fenceline beside our driveway: 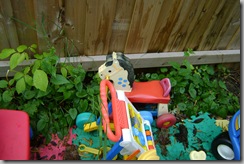 The inspiration:  “if weeds can grow here, surely something nice could, too.”

So I picked five marginally nice and attractive but sturdy (okay, slightly invasive) plants growing strongly in other areas (thus, free!) and stuck them in the dirt.  Covered it with a layer of Now Magazines (free!), compost, manure, and the dregs of a bag of topsoil somebody swapped me for some strawberries earlier in the year (still free!).

The actual soil strip is 4-6” wide in most places; slightly wider towards the garage.  There are also poured-concrete areas here and there where the posts of the neighbours’ fence are stuck in, so I needed plants with fairly shallow roots.

Actually, some of the “wider” area towards the garage was an illusion… excess dirt that had washed down the driveway was piled in the corner of the driveway and weed roots had grown into it, making it resemble soil, but when I tugged, the whole thing started to come up like a doormat.  So I left it in place.

And, again, I figured if weed roots could grow there, why not hosta roots?

Here’s the result – slightly better than a poke in the eye with a sharp stick, even if nothing out of a gardening magazine: 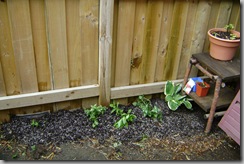 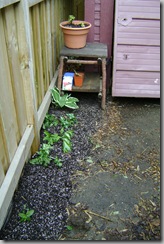 Here are the plants (only 4, but I hope they’ll spread): 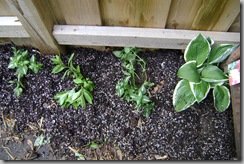 Nothing fancy.  To the left of the first lamium, I put in a couple of sprigs of the chocolate mint that’s growing in the shade beside the garage.  I hope that will take over the whole rest of the area and even… bit of guerrilla gardening… creep under the fence and onto the neighbours’ lawn, where they will get a lovely whiff of mint every time they mow!