Mulch ado about nothing! And… a collection?

It isn’t a professional garden, by any stretch, but a little shredded cedar mulch, none-too-frugally applied (or else it just looks stingy) always looks terrific on the front beds.

They turn out looking all soft and puffy, like real beds. 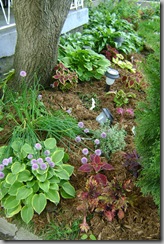 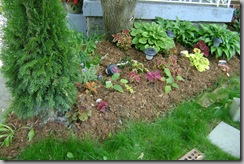 Here are the three artemisias that make up the collection I seem to have acquired on the back side of the front bed, in my quest for something that will grow low, be silvery, and not be more cerastium (snow in summer).  I love the cerastium, especially in flower, but it is such a cliché. 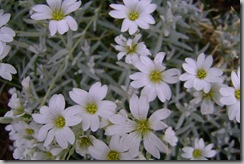 At least in this neighbourhood, it’s like everybody has one, it’s just a question of finding where they’ve got it growing.  (but the flowers are lovely, and artemisia won’t give you nice flowers!!!)

So here are my artemisias, each a small mound, just a few inches tall & wide: 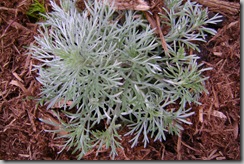 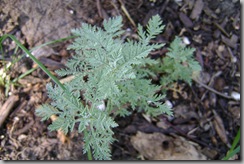 Powis Castle – grows a bit bigger than I’d like, I think, but this one is a straggly specimen so far (received at my plant swap earlier this year).  Less “moundy” than Silver Mound, and thus maybe not as good as an “edger”. 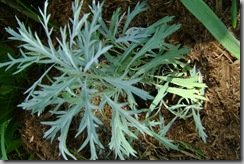 As with everything, I will give this little collection my best all summer… and then see who makes it through the winter.

Ted’s working late, Elisheva’s still on her class trip (back at 8:45 tonight) and Naomi’s probably not eating much after her dental stuff this morning, so I figure I’ll do something easy like an omelette with spinach & herbs from the garden!  Wonder if there’s any leftover leek soup from Monday?

Monday:  Leek soup, tuna patties, rice & veg on the side