… or the Stroller Gods, the Stroller Fairy… whatever it is you believe in, somebody Freecycled me a new Pliko (omg!!!) almost exactly the same as the old one. 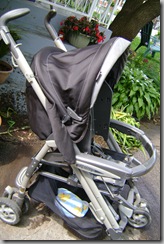 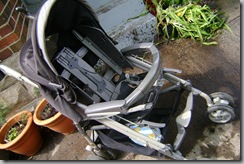 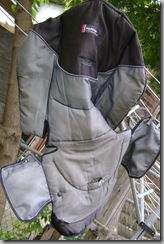 The downside is that the fabric is more scuffed and a little torn in places (I do plan to sew it up tonight).  It was used by an autistic boy, so I figure it got 5 times the wear and tear.

The big down is that the “clip” mechanism that keeps the thing latched shut when it’s shut is missing.  Sigh.  So it doesn’t really stay closed very well.  Once it’s in the car, not a problem, but for also for getting it in and out of the car, it’ll be flopping open all the time unless we rig something quick & easy to hold it shut.

I don’t love the grey fabric as much as the blue check, but I think after 3 days of frantically scanning Craigslist trying to find a Pliko under $100, I should just shut my mouth and chalk this up as a Happy post!!!

(the plan when I woke up this morning was to buy one for $45, but then I got an email offering one free.  $0 trumps $45 anyday, even with a few rips and a broken latch!)

Must have turned the karma WAAAAAY on because I found another carriage at the curb today.  However, it’s a Graco or some American brand and not as wonderful as this Pliko, so I shall pass it on.

Actually, that reminds me:  Dummy old me.  I was out delivering some weights somebody bought at my mother’s garage sale.  So on the way home, I spotted the carriage at curbside, stopped and tossed it in my mother’s trunk.

Here’s the dummy part:  I had no pockets, so carefully set all the money he’d given me ($30 for all my dad’s weights – bargain of the century) on the sidewalk so I could put the carriage in the trunk.

And then I drove away and forgot about the money.

Got to my mother’s house, gave her back her keys.  “Where’s my money.”

Oh, yeah, that.  Searched frantically (no pockets!) and decided I would never see it again.

Borrowed Sara’s bike, rode up Winnett to the place I’d found the carriage… and there it was.  Two fives right where I’d put them; the twenty had blown one driveway over.