Is it any wonder something shorted out?

That was the explanation the Bell tech gave us back in April when our phone lines stopped working one day:  something must have shorted, two wires rubbing together.  Just looking at the awful, unprofessional wiring job they left when we moved in four years ago tells me it was inevitable that something would go wrong.

But now they’ve sent us a bill (okay, not now, exactly… I just noticed the charge on last month’s bill) for the service call, claiming that the demarcation point is outside the house, and anything inside the house is our responsibility.  Ha. 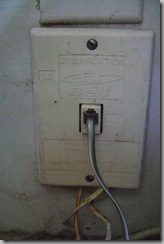 Here’s what I emailed them tonight:

“Our phone bill now reflects a $99 charge for repair service on April 28th. I am disputing this charge.

On that date, a service technician came out because there was no service to what I was told by a Bell technician was our demarcation point - a jack in our kitchen marked with the words "Bell Demarcation Point."

A problem was found due to Bell's faulty initial wiring of our home when we moved in four years ago. The technicians at that time had a hard time initiating phone service and after several attempts, were ultimately successful, but left us with a rat's nest of wires in the basement. I have pictures of the shoddy initial wiring job, as well as the demarcation point jack, which had stopped working on April 28, 2009 when the technician came out.

That technician said that was no longer the demarcation point – it had been changed without my knowledge. I asserted at that time that I would not pay to restore service to that point, because Bell had never notified me, at any time in the past four years, of the change to the demarcation point.

It seems Bell technicians can do or say anything to customers – with absolutely no consequences.

I would be happy to share photos of this jack along with the photographs of the messy initial wiring setup in our laundry room that I believe is the reason the repair was required in the first place. We should not be billed for Bell’s poor workmanship. Please have someone contact me as soon as possible to help resolve this billing issue.”

Here’s what they call a wiring job.  Notice the wires hanging out all over the place, strung loose across eight feet of the laundry room ceiling, bare wires, twisted around each other and in one case, simply rolled up and stuffed into a convenient corner: 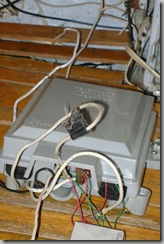 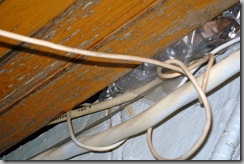 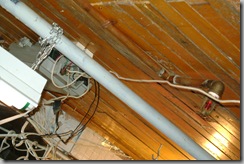 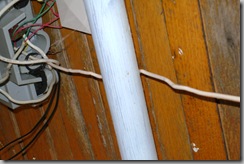 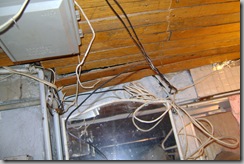