The three “older children” (because Naomi Rivka isn’t usually included in that group!) went to see the movie Up at Yorkdale, and Gavriel Zev crashed after spending the day at my mother’s garage sale), so I had a few minutes left to take pictures and blog before they come home. 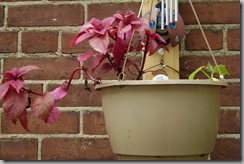 “Royal Glissade” Coleus and “Straight Eight” Cucumber.  Just potted this up today.  I wanted to see what the cuke would do “upside-down”.  (it’s actually the exact right way up, but it will eventually trail down (I hope!) rather than climb a trellis. 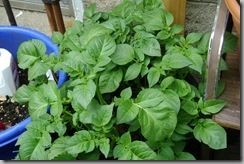 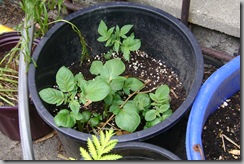 Potatoes in buckets.  Which are supposed to be the control group for my “potatoes in hanging grocery bags” experiment.  One bucket is doing GREAT; when the foliage reached the top of the bucket, I tossed some city compost in to cover the taters; the bucket is now almost full.   The other is a bit of a slow starter, but is now taking off a bit.

I think the slow-start is the one planted with the four Eagle Creek seed potatoes I bought from someone on Craigslist.  No idea what varieties are in there, however.  All the rest are just President’s Choice organic potatoes that had started sprouting.  I know you’re supposed to use real named varieties and disease-free stock.  I just picked ones that didn’t look too mangy.  :-)

In the “slow-start” bucket, I actually planted two layers of potatoes; one first and then another layer that I put on the soil and covered up a few weeks later.  We’ll see how that scheme does.

Isn’t this a lousy experiment?  I totally have no concept of control groups… 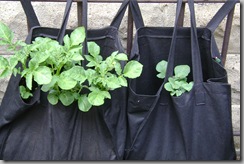 So here are the grocery-bag potatoes.  Again, one’s taken right off, and the other is a slow starter.  They’re both growing, though!  When the foliage reached the top of the bag, I did the same as for the bucket:  shovelled city compost in almost to the top.  \

Will do the same for the “slow-starter” bag and bucket when they’re ready.  You don’t want to crush the foliage (I have learned), just shower it gently with some kind of medium… 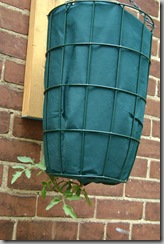 Here’s the “official” hanging tomato (Chocolate Stripes) in the Vesey’s Revolutionary Tomato Planter.   Doesn’t look much bigger than three weeks ago, but it is growing, so I’m not worried – yet! 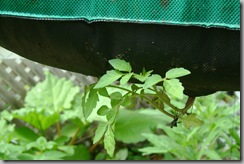 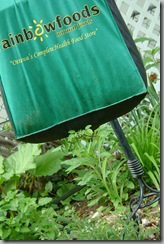 And now, the unofficial hanging tomato (the saved-seeds variety I’m calling Early Tiny Cherry Yum), in a natural-foods grocery bag.  This tomato is actually a replacement for the one in the three weeks ago post.  That one died pretty quickly.  These two (I’m debating thinning them at some point) seem to be doing fine so far. 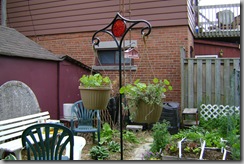 Super-cheap DIY hanging backyard planters.  Found the plant pots and hangers at the curb last year (but I cracked the bottom of one this year so it will have to be replaced – drat).  Planted up with some home-saved-seeds nasturtims and some helichrysum I picked up cheap down on Roncesvalles.  Okay, the hanging hook thingy cost $20.  :-)

When it comes to ornamental hanging things I wanted “bullet-proof” (ie killproof) plants and flowers.  Nasturtiums is (I hope) about as close as it gets. 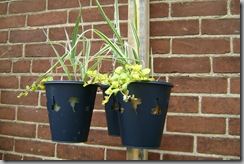 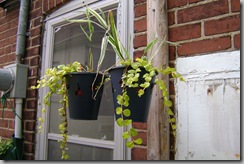 I’m not completely sold on these hanging planters from Ikea.  I like the idea, but there are a couple of problems with having three planters instead of one:  a) it’s hard to balance all three pots (they have to be exactly the same or it will hang wonky), b) they only hold fairly small pots, and so will need frequent watering, and c) if it does happen to rain, there’s no drain at the bottom of the planter, so they need to be manually drained.

Basically, whatever’s in them must be able to tolerate both periods of standing water… and periods of drought.  Eek.

The closest I could find to unkillable for those conditions was hanging strands of creeping Jenny (from Freecycle) and some of my front-bed ribbon grass (Phalaris arundinacea, a freebie from a swap last year).

I do like this combination, however.  Only two plants, common as dirt, but it incorporates some interesting principles of design:  both upright and trailing forms, colour variety (yellow creeping Jenny, variegated grass), plus it doesn’t rely on flowers for colour, it’s purely foliage, so the appeal – if they survive - should last all season.

So that’s the news on all that’s hanging… chez nous!!!