Email to the administration of Downsview Park: 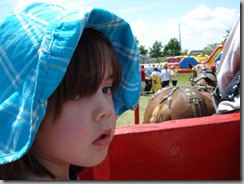 “We attended the Zareinu Moveathon yesterday (June 14, 2009) at Downsview Park, and had a great time.  The park seemed like a great venue - spacious yet accessible for all participants, with plenty of road space for the bicycle events.  (and what a fantastic, worthwhile event it is!)

We had no problems until we decided to leave the park at approximately 2 p.m.

I was informed by a police officer that we couldn't go out the way we'd come in - half the roadway was still closed for cyclists.  The other way out, past the "flea market" building was the only way we could exit.  Resigned, I got in the line of cars waiting to exit.  And then sat, and sat, and sat, as Zareinu cars jammed up against cars full of other individuals participating in various events in the other building.

I sat politely for close to 45 minutes as the cars moved barely inches at a time - though others seemed to be speeding past, then merging further ahead back into my lane.  A few cars were trying to drive in the other direction, causing delays as drivers in their lane going the other way had to merge into another lane as well to get out of their way.  A few drivers were getting out and simply standing around looking at the lineup of cars.

Yesterday was an extremely hot, sunny day, and my children in the back of the car were extremely unhappy.  I did try to do a U-turn at one point, hoping to find another way out (other cars were doing the same), but a Zareinu organizer came along in a golf car and informed us, once again, that there was no other exit.

Eventually, seeing a patch of open grass next to the roadway, I admit that I drove across the grass and carefully down over the curb onto Sheppard Ave West.  Many cars and minivans actually followed me, desperate to get out of the heat and congestion.  Once on Sheppard, of course, I quickly passed the roadway where cars were still lined up to exit, seemingly one per green light, onto Sheppard.  I did notice many cars were trying to turn in at the same intersection, which may have caused the roadblock in the first place.

I estimated from the lineup I saw waiting that it might have taken us another half hour to an hour to exit the parking lot the "legitimate" way, via the roadway instead of the grass.

This situation is completely unacceptable, and I consider your administration completely responsible for these delays.

If Downsview Park wishes to be considered as a major event venue, it must provide accomodations not only for parking, but also for exiting the parking lot quickly and efficiently when the event is over.

In addition to police officers controlling any intersection and roadway where so many cars must enter and exit, both for event and regular Sunday traffic, I would even go so far as to recommend special TTC shuttle buses to the subway, since you could probably avoid the problem of car congestion if your location was more TTC-accessible in the first place (we live minutes from a subway station - how I wish the subway stopped right at Downsview Park and not just half an hour away at Dufferin and Sheppard).

This was the second event I've attended at Downsview Park - the first was Canada Day two years ago.  Both times, I have come away extremely disappointed with the poor management of parking at your facility.  I will definitely think twice before I decide to go there again.