The wonderful world of sub-irrigation!

I caved and decided to do an experiment in self-watering (ie sub-irrigated) veggies.  I was inspired by this site, which has some decent info on urban gardening, though it’s a little harsh on the term “sub-irrigated” (I don’t think the term “self-watering” is all that confusing unless you picture the little planter running back and forth to the rain barrel (as I have been doing ALL week – it’s almost empty!).

Total project cost:  $11 , plus soil/compost I already had, plus an 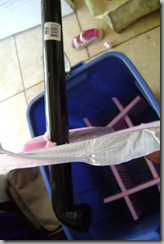 X-acto knife I bought myself and some duct tape plus a storage tote bin we already had (yeah, so there are kiddie clothes that used to be inside it strewn all over the living room now – so what???).   $6 for the EPS foamboard (which actually was large enough to do two boxes easily), and $5 for the pipe – I went for the premium “elbow-bend” pipe so the bottom wouldn’t rest flat on the bottom of the tote box.

Total time:  about half an hour, in several installments due to kiddie-interruptions.

The low cost and low time committment were what really appealed to me.

Here are the steps: 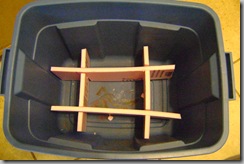 1.  Make a criss-cross grid at the bottom of the bin.  I guess you could make it neater than I did, but so could I if I didn’t have kids screaming in the background.

The website I got this idea from explains that this grid creates nine “pockets” (like tic-tac-toe spaces).  The four corners will be soil “wicks” to seep the moisture upwards.  The other five squares will serve as the water reservoir. 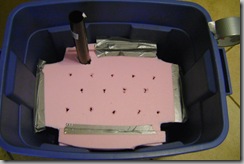 2.  Cut a piece of foamboard that fits snugly about 1/3 of the way up.  I used a hot knife from the stove to punch the holes.  You could use a drill if you wanted to wake up the baby (I didn’t).  Use an X-acto knife to cut a hole big enough to fit the fill tube.  Use duct tape and spare pieces of foam to “snug” the board so there are no big gaps around the edges (so soil won’t fall through much).

3.  Add extra perlite and vermiculite to a smallish amount of planting mix.  This will be for the corner “soil wicks” and you want them to be extra-absorbent to make sure they transport the water nicely.  Pack this “enhanced” soil mixture really well into each of the four corners.

5.  Position the planter where you want it – it’s going to get heavy!  Water the soil well (oops, I forgot to do this!) and fill the reservoir.  Water will be at max capacity now.  Drat, realize too late that you have omitted to include an overflow hole that will let you know when the reservoir is full-up and stop the thing from drowning if rain gets in.  Eek.  :-o

Note to self:  MUST add overflow hole, which will be much harder now that the box is full and planted. 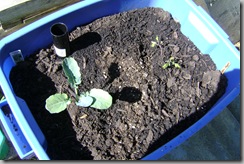 6.  Add plants of your choice.  I figured this was a bit bigger than just one tomato needs (because of the rectangular shape.  It could probably hold two broccolis just fine, but one broc and one tomato will likely be a bit of a stretch.  Nevertheless, that’s what’s in there as we speak! 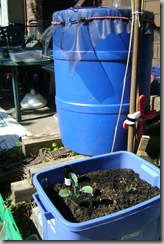 What kind of tomato did I put in???  No idea, I’ll check in the morning cuz it’s dark back there now!  Oooh, on second thought, I zoomed in on the picture and the popsicle-stick tag is just barely visible:  Children’s Garden Roma.  (ie, seeds I saved from the Children’s Garden last summer).

Here it is, nice and close to the rain barrel just in case it ever needs more water.     :-)