So many of my posts focus on things that are growing… that I haven’t spent much time updating you on what’s ROTTING in our yard!

Yup, it’s our multifaceted home composting operation, and it seems to be in full-swing for 2009; yay!

First of all, the worm composter, celebrating exactly one month in our family: 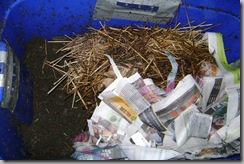 On the left side is what’s left of the original vermicompost which the composter was mostly full of when I bought it.  Not much left; I’ve used it in most of the tomato planters and a few other areas of the garden (picking many worms out along the way – and doubtless losing some – because I was too lazy initially to sort them out).

On the right is “clean” bedding – a mix of straw (hay?) and the “tushie” sections from Now Magazine, torn into strips (so it was never really clean – ha ha ha).

No worms visible on the surface, but if you dig down just a bit with my trusty Trake… there!  See ’em?  They’re everywhere!!! 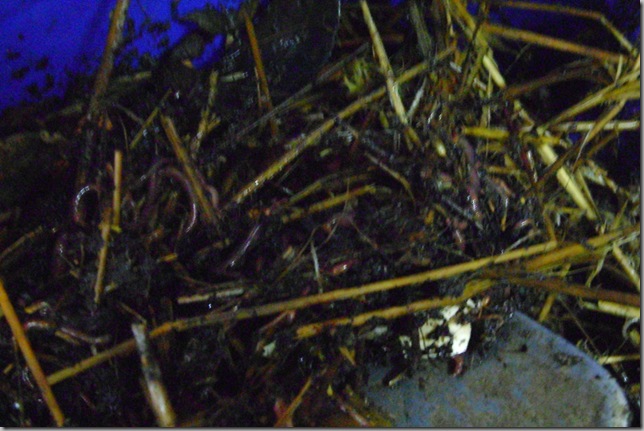 I have been feeding the vermicomposter once or twice a week, with just a “choice” bit of whatever’s going into the main composter.  By “choice,” I mean I skim off some of the worm-friendly bits, easy to break down, like shredded carrot peelings.  Corn cobs and the tough stuff all goes out back.

Moving into the backyard, there are 3 composting bins.  The far left one is the “brush” pile – sticks and tree bits and wooden things that will take forever to break down.  Most of that stuff gets bundled for the city to take away, but sometimes I’m too lazy and just toss it in there. 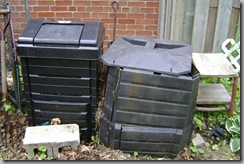 Then, there are the two main composters, composter #1, which is a bit strawy-looking but mostly finished.  I have been using that around the garden a bit, too.  And composter #2, the active pile, which the kids know is the one they have to dump stuff into (though I’m mostly the one who does it).

That’s my pitchfork in the picture, my main stirring tool; a gift from my father when we  moved in.  Or else maybe I stole it from their garage… I don’t remember.  You can see lots of cardboard like the egg cartons that we bring empty eggshells out in and the cereal boxes that we use for almost everything else. 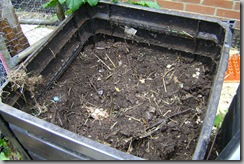 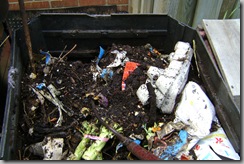 They break down REALLY fast; the ones you see here are already soggy and falling apart, and they’d only been in there a couple of days when I took this picture.  YM came out to watch me turn it the other day and there was literally steam billowing up out of the pile.

Just noticed there’s also still a rubber band on the broccoli stems.  They fall off eventually and then I just pick them out of the compost.  Same with the twist ties on spinach and chard stems.

…So that’s all that’s rotten in the State of Mama-Land!