At last, I finally feel like I’m actually gardening.

Argh.  Between Pesach and everything else going on (like the two little people who scream if I so much as look at the garden), it feels like it’s taken every ounce of my strength to get the veggie garden off the ground this year.

So here they are!  Ignore the tacky window-blind slats over the first two beds.  The soil was mounded so high that I couldn’t nail the slats down flat, so now they look all humpy.

They look a bit spiffy (or will once I nail them properly now that the soil has settled) and certainly delineate the beds better than the garden twine did last year.  But they’re a bit of a pain to work around.  And I have no idea what’s supposed to happen to the blind slats at the end of the season… do I have to tear them off to till everything under, and then nail them on again next year??? 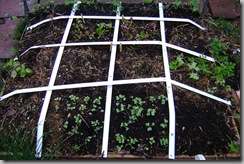 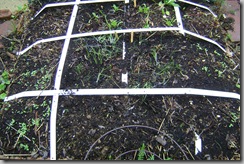 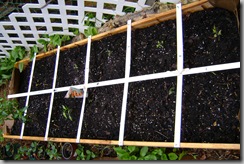 The blind slats were not long enough to reach the entire length so I tied the long one into place with twine.  I also suspect the measurements between slats are not exact, cuz both kids were crying and whining “Mommy, Mommy” the whole time I was trying to mark it off.

For comparison, here are the same beds from last year.

Weird how pale the soil looks in these… way too high a percentage of wood shavings and other things that plants do not like to grow in directly.  Lessons learned. 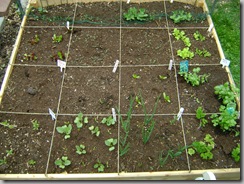 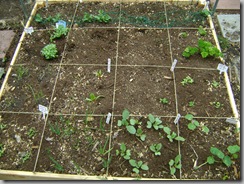 I’m pleasantly surprised!  I remember the beds looking so lush last year that I forget they started out sparse then, too.  These pics were actually taken on May 14th… exactly one year ago today.  I really thought I was extremely far behind:  turns out I’m at about the same place I was a year ago.  (btw, planting the chard/beets ahead of time indoors apparently saved me ZERO time, as last year’s were sown outdoors and reached about the same point at the same time – drat)

The onions definitely looked better last year.  That’s because I started with sets.  I thought I’d save money by doing it from seed this year (starting way back a few months ago…), but the seed-grown onions still look way runtier than anything you get from sets.

First farmers’ market of the year!  Nobody was napping despite being worn-out from dance class (hence no blog post earlier), so I grabbed both littles and headed down to Dufferin Grove.  Hardly any actual edibles, but I bought some green garlic as well as a tomato plant (Chocolate Stripes) and pepper plant (Sweet Chocolate Bell Pepper).

Just noticed a pattern.  Sheesh… guess I’m a sucker for anything with the word chocolate in the name.

Loaded the chocolate stripes tomato into the Vesey’s upside-down tomato planter.  Duh, it turned out way heavier than I’d expected and wouldn’t hang from the hook stake thingy I bought to hang it from.  They said 80lbs in the instructions and they’re not kidding… 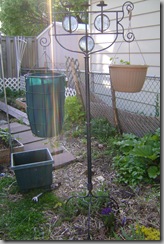 I hung it for now from the other hangy thing in the backyard, which Elisheva calls the candelabra and believes is just too goth to exist.

This is a lousy picture – sorry!  The plant will soon (I hope) get too big to hang here, so we’re going to need to find it a permanent home ASAP.

I should have known.  Tomatoes don’t sail through the air of their own accord, right?  Plant + soil + water = heavy.

Still planning to do hanging bags, however.  Just need some good strong supports along the south wall.  Waiting, waiting, for Ted to rig something up.  My homegrown seedlings are too pathetic to be planted out yet, anyway.   At least they’re nice and small for the swap on Sunday.

Finally remembered to take a picture! 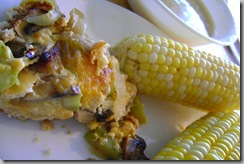 Zucchini mushroom quiche on homemade butter crust, corn on the cob (USA-grown, peaches and cream, but really not bad at all), pea soup (artistically hovering in the background).

That quiche really does look fully-loaded.  I made enough filling for two quiches, but we only had two eggs left, so could only make one.