Ode to a tansy 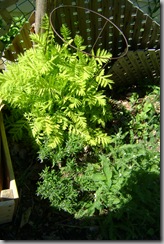 I bought this thing pretty much by accident… in all my reading about attracting beneficial insects two years ago, everything I read recommended tansy and yarrow, tansy and yarrow.  Yarrow was easy enough to find, but tansy was tougher.

Especially cuz it sounds like “pansy.”  Two garden centres thought I meant “pansy” and at Plant World there was a bit of a comedy of errors when one worker called to another on their cheesy walkie-talkies because even though one was saying “tansy” (because I’d explained it to  her clearly), the other was hearing “pansy” and sending her to the Annuals section.

Anyway.  It turned out the only tansy they had was this one, golden tansy, which may or may not have been “Isla Gold” because I have no idea what happened to the tag.  I hummed and hmmed because I wasn’t sure it would invite the right crowd of bugs (shouldn’t have worried!) and because I hadn’t yet been converted to the school of “golden” plants (Elisheva still hasn’t been, and maintains that yellowy foliage just looks sickly).

So anyway, today I was procrastinating (instead of writing the two articles I’m supposed to be working on!), looking for pictures of it on davesgarden.com, a site I sometimes turn to for plant information and reviews (I love any and all review sites!), and there wasn’t much, so I figured I should add my own comments.

What came out is actually just a little on the mushy side… but then, I love this plant!

Suckers like crazy, but they're easy enough to control.  Dig up, replant if you want the babies or give them away (I hope propagation isn't prohibited, because this thing WANTS to spread!!!), because everybody will want a gorgeous plant like this.

Starting from nothing in March, it grows to resemble a big, loose shrub that many people have mistaken for a fern (in full sun?).  Last year it went floppy, so I stuck a tomato cage over it in March and this year it is growing nicely into a graceful shape (it is now May and it mostly fills the cage).

Attracts beneficial insects, and the foliage fairly glows - it's the last thing I can see in my garden before the sun sets.  Gorgeous as a backdrop for showier flowers in home-picked bouquets.  The flowers aren't much, but tiny bugs love them.

Its beauty takes my breath away in my garden almost every single day.

Ironically, I had two dug-up babies of this plant that I tried to give away at the swap yesterday and nobody wanted them.  They looked like sorry old dug-up ferns, but I’m sure in the right context they would grow and grow.  Maybe I’ll stick them in pots near the front door.

Photos and previous paeans of praise to this tansy:

From last July (when it was my garden high), and used it in a homepicked bouquet… and another bouquet! 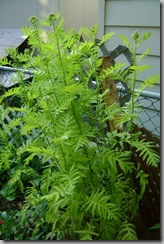 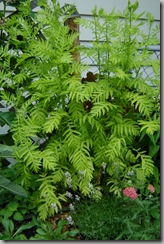