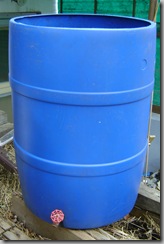 Actually, the title is misleading.  This was already a rain barrel; I found it by the curb on my way to our city councillor Joe Mihevc’s Environment Day last summer (residents nearby had many unwanted items at the curb that day knowing there’d be tons of people coming by).

Problem was, it was missing the lid.  Had somebody taken it for some other purpose before I got there?  Or was that why it was being discarded?

Preliminary testing indicated that it worked just great, meaning it held water, didn’t leak, and the spigot turns off and on reliably.

Because we are who we are, it sat open like this all winter, gathering leaves and snow and ice and whatever.  Emerged just fine, but leaf-cluttered, and lately, I have noticed lots of flies and whatnot buzzing around the water inside.

And even I know a rain barrel needs a lid of some sort.  And also maybe some way to get the rain inside.

If my father was still around, and I’d asked him, I imagine he would undoubtedly have invented for me some kind of weird wooden circle, with a smaller wooden circle screwed onto the inside with a dozen mismatched screws and some kind of elaborate screen.  It would have fit perfectly and worked great. 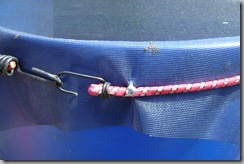 SO… this is the cheap and crafty solution I came up with, for a grand total of $8 in screen, $1.25 in screws, and two bungee cords we had lying around: 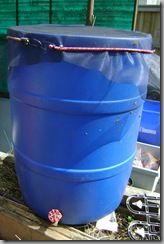 It will also require $13 in downspout parts to divert the water source from the roof to the barrel itself.  There’s also a smaller downspout which seems to be directly overhead that shouldn’t need any modification (I’ll have to watch closely during the next rainstorm to make sure it’s not undershooting the barrel).

Between these two water sources, the barrel should fill up pretty quickly!  We should probably bet around to drilling an overflow spout and putting a hose to direct excess water into the garden.

I’m so happy to have a rain barrel!

To me, the whole point of gardening gently on the earth is somewhat defeated if I  have to run to the tap every time my container plants dry out.

I may still need to rely on tap water sometimes, though.  Last summer was so wet, I’m not even used to having to water.  I don’t think I used the soaker hose more than twice.

If I can find it, I may run it through the square foot beds while they’re comparatively empty.  I don’t have to use it, but with all the tomatoes etc I’m planning to put it, it may come in handy to have it set up.

What a hypocrite, right???