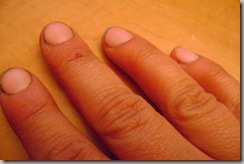 Yes, I love it!  Except they feel all gritty and dry-as-a-bone.

What did I accomplish today? SOooooo much!

Well, we had the unveiling for my father.  Big gathering at the cemetery, perfect weather, party sandwiches at Mommy’s house afterwards.

~ Received a few (4-5?) wool diaper covers.  They need washing & lanolinizing, but should help out a bit.

Sadly, on the way to pick up the freebie garden magazines, I spotted a convenience-store garden shop on Roncesvalles and went in and they had an incredible selection!

Bought some curly parsley (pretty for decoration, but we eat flat because it’s easier to check for bugs, therefore, more “kosher”)  (in quotes cuz all veggies are kosher, but most bugs emphatically are not), new oregano, because mine seems to have died off, some Pink Pewter lamium, just for flower variety (the leaves look the same as White Nancy to me)… hmm… what else?  One more Heliotrope, just for good measure.  Oh, a purple sweet potato, which will hopefully serve as border edging / groundcover in the back sunny hill bed.

Ten bucks later, I picked up my free magazines.  :-)

Finally gave up on the peas, which I planted April 12th.  So before breakfast, I lumbered outside, Naomi Rivka in tow, to plant new peas, which I presoaked overnight.  She did a great job, poking the holes, pushing the peas in, etc.

As we were planting, I noticed a few shoots starting to come up from the previous planting.  Later today, there were a couple more.  Sigh.  I guess I just wasn’t patient enough, as usual.

But it does say on the packet to sow successive plantings every 2 weeks, so I hope these will provide us with a “late” crop.

Did not get the mostly-hardened-off chard or spinach planted today.  That was my goal but I kept forgetting to duck inside and check my spreadsheet to see where they’re supposed to go.  Oh, well:  tomorrow.

The biggest project was finally getting the new square-foot bed settled into its spot.

“Weeded” the last of the strawberries and bee balm out of the spot first, then dug holes for the corner posts, sank it in (using Ted’s level – yay, me, for doing it right!), filled in the bottom with cardboard and free Now Magazines, then a whole bunch of peat moss, storebought cow manure, perlite, vermiculite, and some city compost for good measure.  Tomorrow I’ll fill it up the rest of the way, hopefully, with a bag of PC Black Earth topsoil and the rest of my city  compost.

Yes, it’s expensive filling a raised bed, but this gives me 12 more square feet of growing area, and you only need to reinvigorate it each year with a bit of compost or manure, both of which are free.  So I think of this as a one-time investment in a new bed.  I skimped last year and paid the price in wimpy produce. 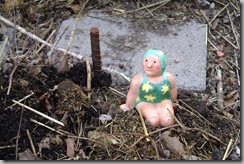 Hard to get stuff done with the littles puttering around, alternating between playing nicely and screaming.  Gavriel Zev was shuffling around on his tushie and broke our little “angel” of the peas.

(Boy, do I like how this program (Windows Live Writer) lets you add new pictures on the fly as you think of them!  Picasa sure doesn’t do that…)

He was cracking her pretty hard against the walkway.  I told him to be gentle, so he patted her a few times, then went back to banging.  Her toes are a little shredded up now, too.  We found her in the trash, and her swimming pool cracked over the winter, so I won’t really cry if she is not salvageable now.

I will cry, however, if he discovers how much fun the dirt is to dig into.  As it is, he tends to panic if something is dirty.  Yay!  Keep it that way.

At supper tonight, at my mother’s house, he just got up and walked over to me, like he’d been doing it his whole life.  Did it a few more times, then went back to being “shy” and refusing to walk even a single step.  I think it has a lot to do with the fact that my mother has carpeting with fairly thick underpadding.  It just feels safer.

While he was walking, he was crowing and cheering the whole time.  I said he will get too used to the constant applause and refuse to do anything without it, to which my mother joked that he’ll climb up to the bimah for his bar mitzvah and we’ll all be cheering.

But I think he felt so invincible that he forgot to be careful and banged his head both into my elbow and into the underside of the table.  He looked so betrayed when he realized that even if you know how to walk, you can still get hurt.

Hey, I just realized – that’s exactly like teenagers getting a driver’s license.  They feel completely invincible with those thousands of pounds of steel all around them.  Not realizing that in fact they are more vulnerable than ever before…

Have I mentioned my big kids are never getting drivers’ licenses?  :-)))

Mommy paid for Omni2, so we all had pasta.  Mmm…