Today was the annual plant sale at the Toronto Botanical Gardens, so I hauled the tired kids there after dance class.  A bit disappointing.

After browsing the plants (no interesting peppers, which I was kind of hoping for, and the perennial supply was seriously depleted, even though today was only day 2 of 3 for the sale), I took the kids for an impromptu picnic down in Edwards Gardens. 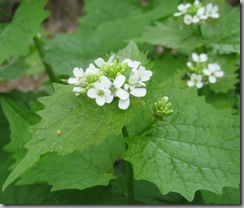 And wouldn’t you know it, the woodlands were – just like at Riverdale Farm yesterday – almost totally overrun with GARLIC MUSTARD!

I am beginning to thoroughly resent this stuff.  I mean, if nothing else (from the most selfish viewpoint possible), what’s the point in going to see different woodland areas if they’re all just going to be a monoculture of the same rather dull plant??? 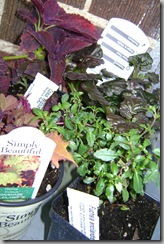 Anyway, the plant sale:  nothing fantastic, but I bought a few things, including a couple of new coleus (Henna and Religious Radish), a(nother!) new bugleweed (Black Scallop) and yet another heliotrope – I love those things! – for the front bed.

The most “random” of these purchases has got to be a single Fuchsia Encliandra “Lottie Hobby”.  Why?  I have been wanting a fuchsia, for no reason, and this miniature appealed to me on a weird bonsai level as well.  I have wanted a red one, but will settle for… well… erm … rather fuchsia-coloured flowers. 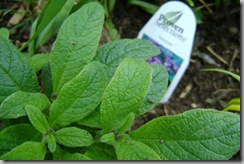 Installing the heliotrope in the front bed made me realize how out-of-control the white-and-green ribbon grass (phalaris?) had become there.  I sunk it in a pot last year when it was gifted to me, but then I used compost and mulch to hide the rim of the pot – darn if the thing didn’t escape.

So I hauled most of it out of there and re-installed it in the same spot in a significantly higher raised pot.  This grass is nice to look at, but it must be contained.  Here it is in its new pot alongside some golden grass (probably hakonechloa aureola) I bought at Northland Nurseries last year. 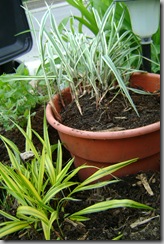 (as an aside, being a sucker for reds and deep-bruise purples in the garden, I kind of have my eye on a new Hakone, interestingly called Naomi, which I thought would be sweet to buy.  If it turns up somewhere for under about $15, I’ll probably buy it and stick it in this spot.  NOT that I am that kind of “latest and greatest” type of gardener.)

I continue to enjoy the juxtaposition of these two grasses, and the variegation is useful, but the pointy grass shape is kind of redundant in what is becoming a way too “spiky” bed.  Between the daffodils, tulips and all that iris and daylily foliage.  Needs a couple of clumps.  And a groundcover (it has cerastium on one side, but it has yet to fill in all over…).