Things that start with C 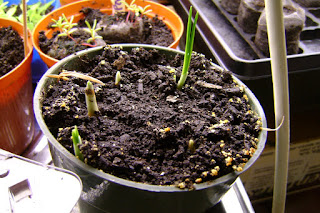 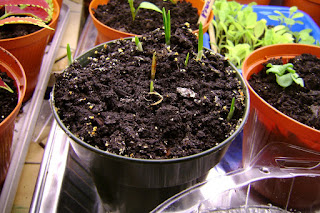 First: two pots of rescued crocuses!
Who did I rescue these from? Well... me.

The lazy-last-year gardener-me who bought two pots of blooming crocuses from WalMart, hoping to save the bulbs and plant them in the fall. I did save the bulbs, really I did. I pulled them out of the soil last spring, cleaned them up, and tucked them back into the pot for replanting come fall.

Naturally, fall came and went and I totally forgot about the bulbs, stuck away in a dark corner of the basement.


When I went to tidy up for this winter's seed-starting, I found them, and a couple had even started to sprout, in a desperate attempt to not die off unnoticed. So I apologized to them mostly sweetly, dusted them off and tucked them into a nice (but surely contaminated) bed of inferior WalMart potting soil (gasp, as I always do when referring to this inexpensive and doubtless awful substance).

Thereafter, they languished for a couple of months on the basement windowsill, until last week, a couple actually started to poke their way up. I find it highly funny that if they bloom this year, they will do so a few weeks after my outdoor crocuses (kind of like forcing bulbs in reverse!), but I have promised them that if they bloom for me, this is the year, they will be planted. 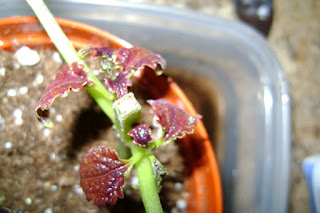 And now, on to the second C: coleus!

Here is a beautiful, dark dark frilly coleus whose photos don't do it justice. 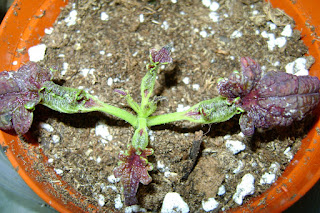 After more than two weeks on the kitchen windowsill, it has finally grown roots and I have potted it on into some nice, fluffy Fafard soil.

There are two cuttings in one pot... I hope at least one of them will grow and add to my coleus repertoire. These pictures totally don't look as nice as it does when fully grown.

I have another picture of it here in its fullest glory, but if I show it, it will be eminently clear where I stole the cuttings from, and I don't want to incriminate myself quite so directly.

Also, I'm rooting another coleus snuck from the same source, and it hasn't been quite so eager to root, so I fear admitting the source will jinx them both. Dumb, huh?

One more garden-related post, I think, if the baby stays asleep.