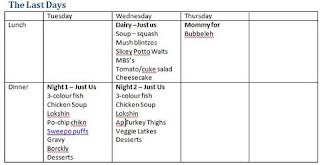 Here's what I'll be busy cooking tomorrow for the last 2 days of Pesach!!!

Slicey Potto Waits is code: sliced potatoes & onions, tossed with a
bit of butter, salt & pepper, then weighted down with a large plate in
a teflon frying pan.
After frying almost long enough to burn one
side, remove weights, flip onto another teflon frying pan and re-add
weights. Cook another long time, until almost burnt on the second
side.

The weight squishes down and melds the layers of onion, potato and
butter and makes it yummy, yummy. I was originally going to make hash
browns for the first days, but everybody prefers this.

The only problem is that even six potatoes worth disappears in about
three seconds... you have to supervise serving it because it doesn't
look like much once the layers have gotten all condensed.

It's still filling, but people don't realize that until they're
halfway through eating and by then the serving plate is empty. :-)))