Here are some old friends emerging in the backyard. I love how sneaky and subtle everything looks as it slowly pushes its way back into the sunlight after the long winter. 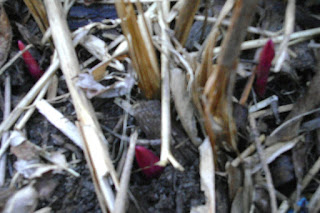 Peony - it took! I was so afraid these wouldn't come back after my crude transplant efforts. There are two of these, and they were dying in the dark back corner underneath a cedar tree. So I brought them out into a place of honour in the well-lit front of the raised backyard bed.

Peony shoots in spring are little lipsticks. Three of them here, at least one on the other side. That's from memory: I don't actually use lipstick. 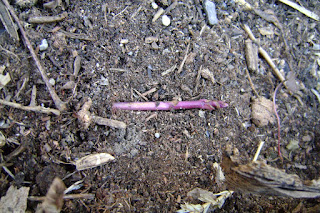 Chocolate mint. I know, I know. You're not supposed to let mints have the run of the garden or they will do exactly what this one is doing: sneak around and spread via underground runners. It looks like a snake, peeking out here, doesn't it?

This one lives in the cool, damp dark spot beside the garage where, inexplicably, my raspberries are doing okay. I actually want the mint to spread and act as a groundcovering mulch. Their roots are shallow and I don't think they'll choke out the raspberries too badly.

Garden resolution: this is the yummiest, freshest-tasting mint I've ever grown. Save leaves, dry them, make TEA to last if not all winter, all fall!!! 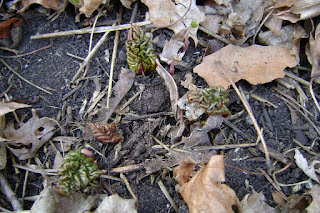 Rhubarb. It always looks a little rude to me when it pokes itself up. It's wrinkly and slick like a newborn baby. The crumpled leaves reminded everyone here tonight of a brain.

Every summer, I swear I've killed my rhubarbs, but no... have not quite managed yet, and this one has enough leaves now that we might even be able to harvest something.

This is our fourth summer here, and I believe its fourth summer, too. I could be wrong. Oh - just checked: I planted it in April 2007, making it only TWO years old. That means we can harvest some, but not, as Elisheva says, go nuts. (her expression is "like nuts") 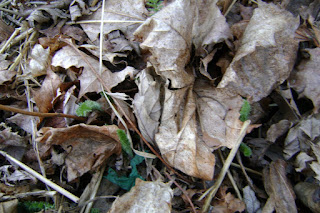 And finally, of course, the most faithful friend my backyard garden has... weedy, dependable yarrow.

It has stood by me through thick and thin. It grows and flowers where nothing else will, demands nothing beyond a little support and attracts any number of happy bugs and bees to our backyard. I think I'm a sucker for frilly leaves.

No idea which one this is... that stretch has a mix of paprika and terra cotta - mostly earthy red shades. I added a couple of new varieties in other areas last year including moonshine and an apple-blossom pink one. Just have to figure out what I did wrong - I deadheaded a couple of them and the blooms never came back...