Laughing all the way to the grave 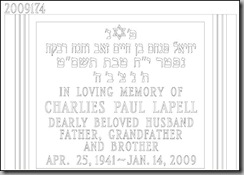 Got this a couple of weeks ago, but didn’t get a chance to post it... here is the official proof from the monument place for the stone that will be laid on my father's grave. My mother emailed it to me as a PDF so I could proofread the Hebrew... lucky thing for her I checked the English, too.

YM & I almost fell over laughing when we saw it. In case you don't know us, I'll fill you in. His name was not "Charlies" but Charles Paul. Never understood why his parents slapped that name on him, then proceeded to call him Paul his whole life. Nobody called him Charles, Charlie, Chuck, Chaz, or any Charles variant. Just wouldn't have suited his personality. (growing up, some people actually called him "Pinky," for his Hebrew name, Yechiel Pinchas, but that never suited his personality either - at least, from the time I met him)

Oh, yeah, plus pizza supper (paid for by Ted’s brother Bobby), plus Elisheva’s art class, plus Ted’s pottery class, plus the littles’ swimming lessons, plus YM’s homeschool shop project each demanding every second of our attention.  Gah.