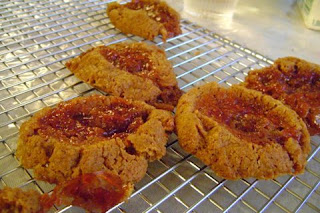 I hate, hate, hate people who make me and my family sick. WAY beyond
being rational - I hate them so completely, inside & out.

I had already called Ted to change him, because I'd already changed
one moderately yucky diaper today, so it seemed fair, but I hadn't
surveyed the scene and didn't realize how yucky the situation had
suddenly become or how lazy I seemed when I wouldn't move a muscle
towards him...

And then Sara called to say she still has her stomach thing, a week
later, which would maybe have made her contagious when she was
handling my sweet young things and my FOOD, the FOOD FOR THE SEDER.
Gaah. Hadn't even thought of that until now.

We had coconut-breaded chicken which was nice, but I added honey and
it tasted a bit like a "macaroon breading" - a bit intensely sweet for
most people's taste. Then the instant mashed potatoes tasted like
fake chicken and the squash was stringy. Ew. Not my most successful
supper ever.

Though I did end up making these delightful peanut-butter-type cookies
(made with almond butter). You don't want to know how much the tub of
kosher l'Pesach almond butter was, however. Okay, I'll tell you, in a
whisper: $12. :-o

Anyway, the cookies were lovely, even though Elisheva complained that
everything is almond.

YM has my throat-hoarse-stiff-achy thing from last week. Weirdest bit
is he has the same pea-sized bump-in-palate that I had, that I thought
was a totally unrelated "symptom."

What kind of symptom is that? A pea-sized bump. In the middle of the
roof of your mouth???

PLEASE, nobody else vomit or poo at all tonight.

We checked out a nice new greenhouse tonight - Toronto Centennial
Conservatory. It actually was not very nice, and certainly paled in
comparison to Allan Gardens. I forgot to bring my camera, so you'll
have to take my word for it.

There's a nice duck pond outside, but inside, the terrain is kind of
monotonous and they had this awful squawking cockatoo thing. The main
room was too warm, the "spring" room was not as artfully arrayed as
the one at Allan Gardens usually is, and the cactus/succulents room
generally looked a bit more unkempt, though we saw a few interesting
new species of cactus.

Also, I think I spotted a dead fish in the koi pool.

Sticking with Allan Gardens from now on. :-)))