I've kind of slowed on the coleus updates because there are no new coleus at this point. I've shut down the windowsill operation and everything is now in pots, just waiting to go outside for the season.

They'll probably be last, right around when the tomatoes go out... or later, so I don't lose any, like last year. Coleus are extremely tender, and really can't take any cold weather at all. Or too much cold rain, like we're getting today. I haven't even thought about hardening them off yet. 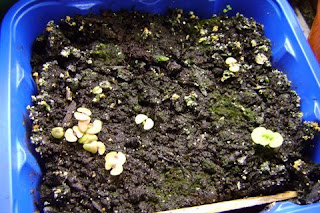 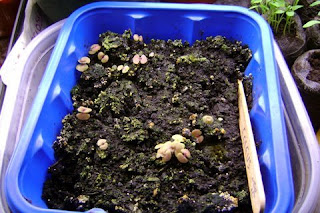 First up: the seedlings from early March, still poking along. So unrewarding to start coleus from seed. It does so well from cuttings, I must ask myself the same thing I asked around this time
last year: why?

Well, maybe never again, but I admit, I WAS a sucker and bought a bunch of "black dragon" seed which I started in a third mushroom flat last week. Why? The promise of lots and lots of beautiful plants for very little money. 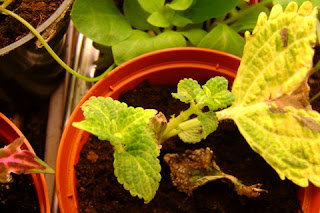 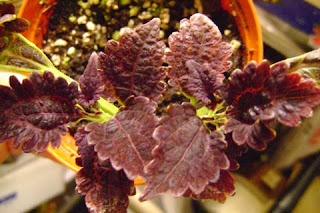 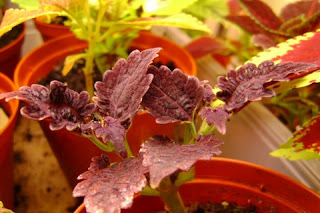 And then, there are two "hot" new coleus brewing downstairs that I'm totally excited about. One is a new variety I think is called Electric Lime (1 picture)... the other (no name, 2 pics) is dark-dark, almost black, and frilly at the edge.

There will only be two of these plants (one of each), so not enough to spread around the garden or swap, but if they do well this summer, hopefully, there will be more next year.

Along with whatever interesting comes up from all those seeds..... :-)