Brrr... Elisheva on the set of Scott Pilgrim! 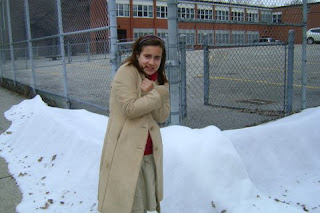 On the way to Riverdale Farm, we passed some fake snow that had been
laid out for the filming of the Scott Pilgrim movie, which Ted knew
all about, but none of us had ever heard of.

The thing is, although it was sunny out, the temperature was only
about plus-five, so Elisheva's mock shivering in the picture was not
really much of a stretch.

The fake snow was completely cool, though! They blanketed the alleys
around cabbagetown, leaving fake tiretracks and even bits of ice.

In this picture, you can see how they've sprinkled the snow with
leaves and schmutz - when we first arrived, it actually looked too
white, and therefore, kind of fake. With a bit of dirt, on an
overcast day, it really did resemble the real thing.