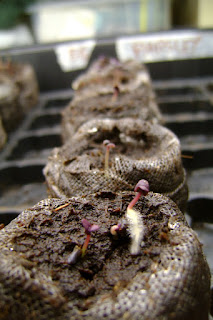 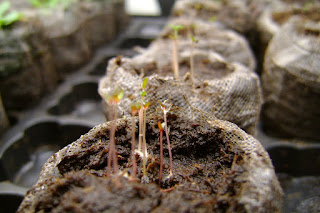 oved the Red Rubin Basil & Portulaca (both sown just last Wednesday evening!) (and shown here in that order) out of the warm covered greenhouse because I am SO scared of damping-off this year. Any kind of fungus just runs rampant here and I have lost whole flats of things in past. :-(((

I'm hoping a combination of open air, dehumidifier, and allowing the peats to stay a little drier than usual will help fend it off without "No Damp" this year.

Oh, yes. I have also been watering fragile, brand-new seedlings exclusively with weak chamomile tea (2 bags in a pot of boiling water, steep until water is cool enough to pour on capillary mat).

I just read two days ago that capillary mats can harbour fungi, however. On the other hand, self-watering. I am definitely a sucker for anything that waters itself!

So what's the third sprout???

Back where we were basically a year ago today - trying to find him a yeshiva (Torah high school) for next year.

At least this year, he's less of an unknown quantity. He's had this entire year in an environment where his rosh yeshiva has gotten to know him very well and knows his capabilities. The two school rabbonim I have spoken with today were intially kind of negative, but I have gotten a bit pushier and once we start to get into the nuances of his story, they start listening with a bit more interest.

Funny about our last name, however. It's kind of an icebreaker, but not exactly in a good way. I wonder what these guys would do if they were up against someone with a last name like Chang or Vasquez (both fine Jewish names, you understand!!!). Ours is at least kind of anglo-saxon, though I guess that's the problem. The second one today I had to spell it over and over to get all the vowels and everything right... and he still mispronounced it once it was written down!

And then explaining the family situation, well... oy. One rabbi asked me how many full siblings YM had and how many half, and I basically said we don't do halves... we're all family. They're all my kids.

The heartening thing is that once they hear that I am calling more or less with his rebbe's approval and his rebbe seems to think he's not only up to but would probably exceed the demands of a mainstream school - and that he thinks exceptionally highly of Yerachmiel Meir and his abilities - their ears do perk up. I really hope the yeshivishe velt is a level playing field in that they take the boy on his own merits.

In which case, this little sprout ought to do just fine.