I sometimes joke that I'm not a successful parent unless all 4 of my kids are crying at once, but the truth is, it doesn't happen often. Tonight, I got to three: Gavriel Zev, out of his head with tired, Elisheva Chaya needing to stay up and study but acting so awful I sent her to bed, and Yerachmiel Meir who sulked off to bed in protest because I wouldn't let him have more computer time.

Me: "you're supposed to be flossing - don't touch the computer."

Him: {joking around about typing his essay with one finger while flossing, and me gently but firmly saying NO}
Me: {turned around, back to eating supper, yum, yum, munch}
Him: clickety-clickety-click
Me: "Hey! That's the computer - okay, no more computer time today!"
Him: "even for schoolwork?" (he's ahead in schoolwork for a change, but some of it is just getting fun!)
Me: "even schoolwork"
Him: "Well, that's not fair. Now you're going to punish me for wanting to listen to music while I floss!"

It turns out he wanted to play a song while he was flossing, but as I pointed out, all he had to do was ask my permission. I could have said yes, in which case, we'd hear the song. And even if I said no, at least he'd still have had computer time later.

When I went downstairs to see where he'd fled to, he was in bed in the dark, said Shema, and that was the end of him. So not exactly crying, I guess... and Naomi went cheerfully enough, I think. Gavriel Zev and Elisheva Chaya more than made up for the other two less weepy ones.

I was out tutoring, Ted made beanie burgers, perogies, soup. 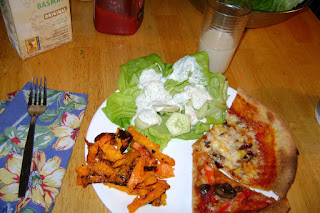 Homemade pizza crust - that was my contribution. Oh, and salad. Ted did sweet potato wedges. Yummy...!

Yes, this salad is practically swimming in dressing. I ended up tossing my salad back in the bowl and mixing this quantity of dressing with all the remaining salad.

It was a yummy dill dip that Ted made for Naomi's birthday last week, reformulated slightly to a more dressing consistency with a drop of mayo and some lemon juice. 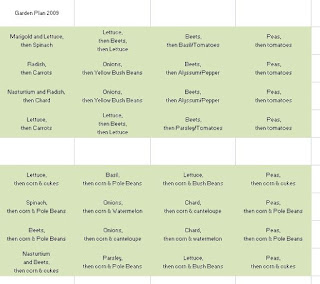 I actually got some garden clean-up stuff done today. Tons more await the next time I set foot out the door.

Meanwhile, back inside, I have (I think) finalized the Square Foot Gardens planting plan for the coming season.

Tonight, following my seed-starting chart, I hope to start from seed in peat pots:
~ SPINACH (late already)
~ JALAPENO PEPPER (late already)
~ Some mixed small bell PEPPERS also... though I do have the one I've overwintered, it didn't perform fantastically and I'd like to try another kind that might be a bit less needy.
~ Maybe some onions, though I did wintersow a bunch... I'd like nice big ones ready to pop in the ground as early as possible.


Now I have to run and wash dishes. I promised myself - and Ted - that in return for the vast and exhausting Pesach cleaning he does throughout the house, I will cheerfully do all the dish-washing (and in my head, laundry, though I usually do all of that anyway) between now and Pesach. And 5-minute tidies in the LR/DR at night. Some of those things I have only agreed in my head, just in case I need to renege. ;-)

Do I need to add how very, very surreal it feels to be making a seder without my father?