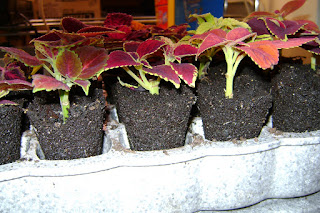 Last week, a couple of the newer coleus cuttings rooting in the Lee Valley Propagator (it's a great thing, it's not Lee Valley's fault!!!) got a bit wilty, so I pulled them out. They were sickly ones anyway, and I probably shouldn't have pulled the top off because they were probably doing okay under the dome, though the bigger ones were starting to rub against the plastic.

Anyway, today, I noticed a couple more wilty cuttings, including some that had looked fine before. A quick gentle tug on the leaves revealed their sad fate: no roots, black rotty-looking stem (no pic, sorry!).

So, since all these cuttings share a common water supply (eek!), I staged an emergency rescue mission, getting out all the remaining cuttings before they, too, could succumb.
In this picture, I actually managed to use the fancy base of the propagator to "pop out" the rooted cuttings. Works pretty well!

I figure it's a fungus of some kind that was starting to spread even to the healthy plants. I'm planning to scrub the propagator in the kitchen sink with a touch of bleach before its next project. (is it time for tomatoes yet??? I really don't want them to get leggy... maybe I'll try my new batch of white petunias in there first!) 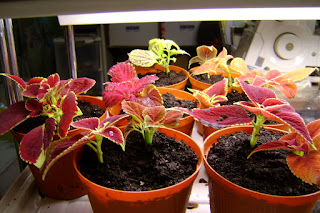 Here are the ones I managed to rescue - 14 cuttings with good, strong roots, into 7 pots. Each pot has a "standard" red one along with a "fancy" different one. I know the roots were good because, for most of them, I lifted them by the leaves and the entire soil underneath came with the plant.

All the rest, maybe about six, were lost. Including the only really good cuttings I had of the frilly one I keep referring to as a "dragon" coleus, even though I don't know if it is.

It's funny... they always say cuttings rooted in soil will grow better and be more vigourous. But anytime I have ever rooted coleus in anything other than jars on the windowsill - anytime I think I ought to "fancy it up", I lose some. I'm talking 100% on the windowsill versus between 50 and 75% in various things including perlite, potting mixes, whatever. And I have never lost one during the transition from windowsill to soil, thank you very much.

I think I'll stick with the windowsill for now.