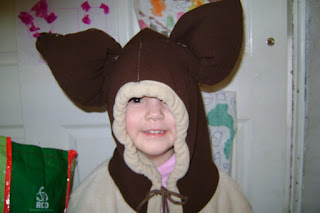 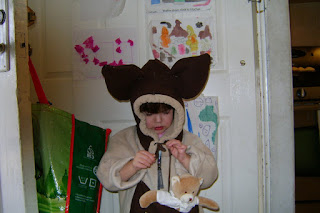 Two sweatshirts and a whole lot more sweat (mine). Broke the zipper this morning but managed to salvage it. I really like the way the beige of the two sweatshirts matches - ie around the hood and on the pouch - and honestly, the two-toned look was on purpose, really!

I thought it would be sweet to have patches of colour, but looking at it now I wonder if I shouldn't have made it more monochromatic. Anyway, it's done. I added a tail at the last minute - and even asked Naomi Rivka what colour the tail should be because I had lots of both colours of fleece left. She said brown - so there!

My favourite features are
- very soft and comfy, with a big neck opening, so no fear as it goes over her head
- I kept the drawstring from the hood (gasp - drawstring on a child! chas v'shalom, but to me, it's cute and if she does decide to sleep in it, I will probably remove the string)
- I kept the zipper from the body sweatshirt, and it really does zip up and down well (after some mostly-silent swearing after I broke it this morning)
- She loves the pockets!

And, of course, the moment I always love love love when creating a costume for a child...
the moment she takes a look at it and somehow I have made it exactly what she had wished for.

A few moments of teariness this evening nevertheless. Remember, this is the child who would have nothing to do with dress-up, make-up, face paint and costumes for YEARS. Anyway, I convinced her that she could wear a nice t-shirt and pants underneath and that she'd get to go to shul to see all her friends dressed up. 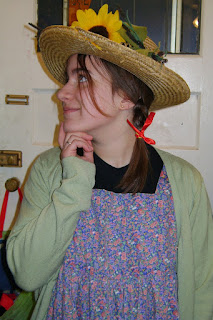 Not quite all, but as it was mostly the older kids (little ones having been kept at home tonight), she was more than content.

Actually, I must add here: I sat through the megillah reading with ALL FOUR of my children tonight. Let me say that again. Okay, Yerachmiel Meir was in the men's section, but he was IN the shul, and so was I, and so were Elisheva Chaya, Naomi Rivka and Gavriel Zev. And Ted. Nobody had to leave. Nobody cried - okay, there was a tense moment when Gavriel Zev wanted to close my chumash and I wouldn't let him, but he was diverted to a siddur of his own just in the nick of time. Yay. 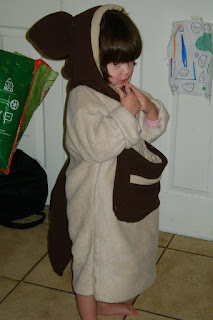 My little family is growing up, I guess...
I actually went to shul planning to play with him in the hallway and go in for the later reading. I was visiting my mother and Elisheva Chaya and when they started, just stayed in "for a few minutes" to see how Gavriel Zev would do. I was prepared to dash out the second he made a noise.

He did clink his little gregger a bit, but nobody seemed to mind. Then he made the clashing, clenched-teeth noise in his throat a bit, but again, it was no louder than the general murmur of contented children, so I stayed in.

Sometime around Chapter 3, I started thinking he'd better not make a noise or I'd lose all the time I'd invested so far hearing the megillah, but again, no big deal if we had to leave.

Around Chapter 6, I started wondering if he might not make it all the way through.
And then, the way the Stone Chumash is printed, around Chapter 7, you flip to the page with the entire rest of the megillah, and then I thought - "he'd better not mess this up now!"
And he didn't.

It was very nice coming home with everybody instead of walking home in the cold and dark the way I'd planned.