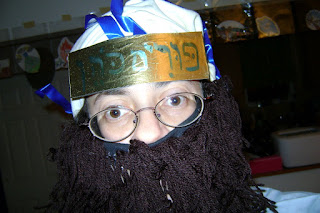 Dug up this old thing last night... my kohen gadol costume! From goodness-knows how many years ago, but still in pristine condition. I actually folded everything up and put it away in an old zippered clear-plastic bag, the kind bed linens come in. 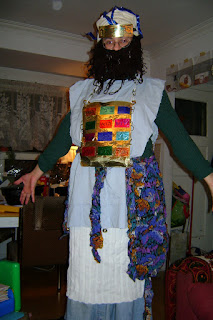 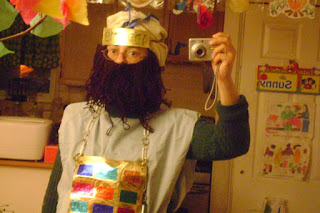 I totally forgot there was a beard in there. The green shirt is a trifle inauthentic. I'm going to find something white for Purim, obviously. 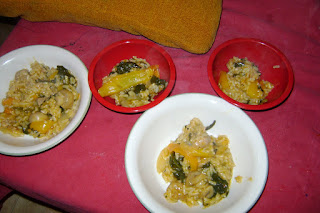 Well, some kind of wire has gotten crossed in the "what to make for supper" department of my brain, because I basically made "veggies-n-rice" for the second night in a row.

I made it in the pressure cooker, with some trepidation because the last time it did so badly and took so long. Tonight - amazing. Ten minutes under pressure, a few minutes to de-steam (it is physically impossible to open the lid when the pressure is on without snapping off the safety valve) and it was easily the best rice I have had in a very, very long time.

Ted bought this shmancy Scotti Arborio Rice that came in a weird vacuum-packed "brick" format. I made YM hold it and guess what it was before I opened it... he had no idea. Because it really felt so solid. Then I sliced it open and it turned into rice - magic!

Anyway, though I mocked it, the specialness of the rice might have had something to do with how well it came out, though I think it was also the clockwork-smooth operation of the pressure cooker. The rice was cooked but not overcooked, not at all mushy, but not overly firm either - a nice change from last night when every other grain was still crunchy. Why does that happen???

Missed my aerobics class tonight because Ted was supposed to work late. I asked Elisheva to babysit but she complained and complained about how much she had to do, so I called my mother, but she was already out. And then I had the brainwave of asking YM to watch the kids at the library - actually, he suggested it. So I was going to go to my class anyway, but then YM started having a fit and talking about how hard his life is at school... and then said he wasn't going to watch the kids.

By then, it was after 6:15, and we still hadn't eaten, and then Ted called to say - for the first time EVER - that he wouldn't have to work late after all due to someone else's scheduling mistake. So we just all sat down to watch the end of Shrek and eat the delicious risotto and that's where we were when he came home around 7.

YM refused to eat tonight and was also acting a bit crazy; though to be fair, I took away his computer time after I caught him drawing molecules for Grandpa without setting the timer. We have a rule that even when he's allowed to use the computer (for personal or school use), he's not to touch it without a timer going. I also discovered that he'd been doing his math homework in Word instead of writing down the problems and solving them on paper (takes a billion times longer and the problems all look weird).

I thought I was very nice and sympathetic, just listening and giving him a hug... but then he got all screwy at the library again and yelled and went off after I told him he couldn't use the computers there either.

Anyway, snit at the library, snit in the car on the way home... I swear, I started the evening with hugs and sympathy, but it's hard to stay sympathetic with this kid for long without strangling him...

Meanwhile, we're still wondering: why wasn't he hungry? What did he eat today?
Earlier in the year, his rosh yeshiva was paying him for helping around the shul... maybe he has money from there?
But he swore he didn't eat any lunch.
I suspect it's a technicality: he probably means he didn't literally consume (choose one or more of the following)
a) several food groups at one sitting
b) between the hours of 12-1, ie lunch hour
c) sitting down at a table
d) from a restaurant
e) lunch-type food.

If he had scrambled eggs (ie breakfast food), standing up (ie not really eating a meal in the normal way), by themselves (they're usually accompanied by toast during a meal), at 4:00 p.m. (not the usual lunch hour) in the back-alley of the shul (not a usual lunch place), he would definitely, in good conscience, and without a clue that he was lying - be able to honestly swear on his parents' grave (the early one he's driving us to) that he didn't eat lunch today.

He could be stuffed full of chocolate bars, pasta, sushi, whatever... and still swear he didn't eat lunch.
Sheesh.

Feels good to vent, though!!!