Fusspots with too much time on their hands 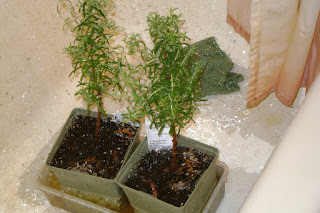 That's what I've always thought of people who showered their houseplants, anyway... I had heard of it, but deeply hoped I didn't know anybody who actually did it.

Okay, so now I draw the line at showering with my houseplants.

These rosemaries, overwintering in the living room window, were completely infested with some sort of teeny-aphid-thing that left dusty gray residue and webs all over them.
It was probably my fault because every time I pruned the rosemaries, I'd just lazily drop the prunings over the soil at the base - I figured it was healthy mulch, but it was probably just harbouring bad insects.

Anyway, I noticed a few dead leaves and figured they were so horrible to look at - I'd better clean them up a bit, starting with... a SHOWER. 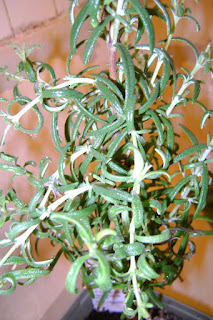 They look much improved after their 5-minute shower, by the way. The leaves are all glossy and wet, but no trace of bugs or webs. A completely organic remedy! Okay, if you don't count the chlorine and fluoride in the water.

Most importantly, I can feel myself starting to love them again. Sort of like teenagers, I guess. Clean them up a bit and you get a glimpse of what you liked about them in the first place.

Gee, your rosemary smells terrific.
p.s. These are my Rosemary Topiary project: I bought them cheap in the fall, 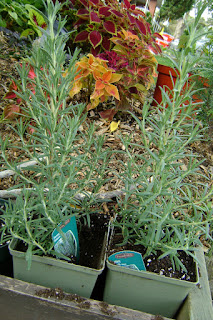 so they didn't really spend much time inside. Looking at this "Before" picture, I think they actually looked healthier back then, but it's not really a fair comparison, because I had to cut off all the big healthy lower branches. You can see, I hope, that the tops are WAY less scrawny, and there's more brown "trunk" wood than before.
I wish I'd taken more pictures along the way... but I will start now so you can see how they're coming along!