I'm still on the search for the perfect kitchen compost bucket - I'm still leaning towards rectangular ice-melter buckets like we used last year, though I've failed to find any on freecycle (drat!) - but a big bucket does have its minuses and in the meantime, I have developed a bit of a system...

First of all, I've already mentioned that I now save eggshells in the original carton in the freezer (click here and scroll down a bit). We mark the carton clearly when all the original eggs are gone (with the letters MT, which spell "empty"!), and when a not-too-snowy day comes along, we hike all the cartons that have accumulated out to the composter. Each carton can actually hold several cartons' worth of shells, and I think of the carton plus shells as a kind of "power-pill" for the garden - calcium plus carbon in the form of egg carton. 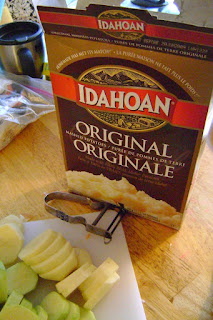 Anyway, here's the other part of the system:

A big bucket is great for erev Shabbos and times when we're creating mountains of veggie waste. But otherwise, it just sits around filling up and we're too lazy to take it out and Princess Elisheva is pretty easily disgusted by the look of it, though we never let it get so bad last summer that it smelled.

So what I have discovered I can do INSTEAD of letting the big bucket sit is grab a BOX from the recycle bin and chuck the peelings etc into there. Whatever size box you need, up to a point - cereal box would probably be the max you'd want to do.

When the box is moderately full, or at the end of the day, just close it up and drop the whole thing in the compost bin as-is. Again, carbon (box) PLUS nitrogen (kitchen wastes) makes for perfectly balanced compost - a no-brainer, as far as I can see. As a bonus, the not-quite-full box takes up the same space as a full box (at least until it starts deteriorating), creating extra airspace in the compost bin, which should, theoretically, get those aerobic microorganisms pretty excited.

And, yes, the worms apparently have no problem smelling and finding your stuff inside the box!!! There is always an opening in the box, and most thin-sided boxes like this one only last a few days in our composter before they start to get all holey. 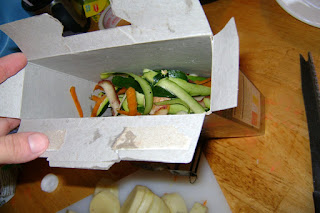 Mmmm... box full o' peelings. Another composter "power pill"!!! Because peelings are the best, best thing you can put in a composter, short of tossing stuff in a blender, which some people do. All that available surface area - they're practically decomposed within minutes.

I did worry about lead in the printing inks on the boxes, however. Because that's the sort of thing I worry about. But I figure it's food packaging... maybe I shouldn't be so complacent, but I have convinced myself that this is safe.

Have I mentioned that my mouth really HURTS???A lot.The left side feels huge and hot and swollen. I thought it was from a canker sore that was there, but that has receded and the pain is still there.
I'm scared that this means Something Bad.

But I also - and this is my general rule for issuing health-related complaints - want to get 2 nights' good sleep before reporting it to my dentist. Because I have found that many, MANY medical problems that I thought might be something serious actually do go away with a reasonable amount of rest.
Again, scary.

Anyway, tonight's supper:
~ Carrot-zucchini soup (with a bit of potato), based loosely on this one but that actually looks a bit lame... (why is everything shredded? and who uses garlic powder in soup???)
~ Oven-fried rice, but with tofu mixed in it will be a main course

I realize this is mixing kinda-asian with kinda-european food. Hope you don't freak out too much thinking about it because it's gonna be YUMMY!(with a bunch of Tylenol in me first for my mouth pain... :-((( )