Well, I thought they were cute kids 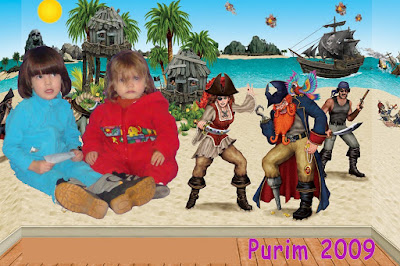 Ted had it done, I guess when he took them to the Purim party at the BJCC.
I have blanked out the name of the photo studio who did it and also fixed Naomi Rivka's demon-eyes.

They must have had tons of customers that day, but in addition to the red-eye, they cut out and pasted the kids' bodies really badly.

And what is with that background???
I don't know if Ted had a choice (pirate scene or bordello?) but this isn't the most kid-friendly imagery.

Between the deadly cannon fire in the background ("somebody get those kids out of there!"), the half-nude "lady" pirate, and the creepy Skull Mountain that looks as if it's drooling on Naomi's head, well...

That's all.
Oh, also, I just noticed there are people, apparently trapped, in the little hut over Gavriel Zev's head.

Cute!
Did you notice the pirate skeleton, foundering in the sand?
Forget it... it's all just too easy a target.