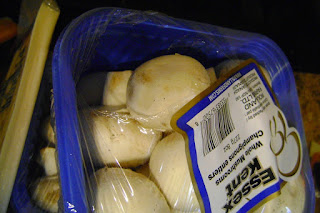 The baby just passed out in his crib so now I can type some more! 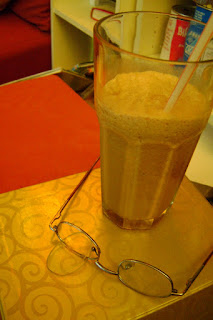 These days, his "thing" is standing up and playing in bed as soon as he's put down. He also tosses all his animals and friends out (well, I only give him two). He chatters happily for a while, then starts to kvetch, so I go in, lie him down, and sing to him again. The next time it happens, I don't sing, just say "sleep time" very gently and lie him down. It takes about 3-4 lie-downs before it "sticks"...

The last few times, at the very last lie-down, he has been basically asleep on his feet. The second I lean him back, like a little crocodile - or whatever animal it is that does that - his eyes shut and he passes out. Then, I stuff the blankies over him and high-tail it out of there to go...

I have discovered that the more generic name for these is probably "coffee smoothies," and here, thanks to the BODUM, is today's experimental recipe:

~ 6 cubes frozen strong, good bodum-made coffee (mmm...)
~ 2 tbsp Hot Chocolate Mix (ours is Carnation, but we've used others; I only used the mix because I couldn't find the pure Hershey's cocoa in the cupboard)
~ 1 tbsp Condensed Milk (I use the President's Choice but any brand would work)
~ 3/4 cup milk (ours is 1%)

Blend briefly in amazing last-year's birthday blender (see last year for more details on that acquisition!), pour out, stick in straw and enjoy. Not bad for an experiment! I'd like to try pure cocoa so I could up the condensed milk (it adds creaminess as well as sweet) but it might turn out powdery.

On another note, it was 17 degrees in here when we came home... I did have to kick up the temp a bit so I could drink the smoothie. :-) 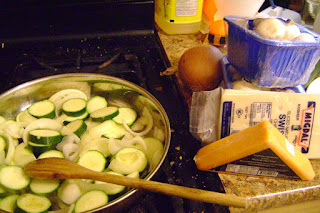 But just so's y'all don't think that what I do around here is mostly sip drinkies and fress on bonbons... here's Today's Supper, just (partly) fixin' on the stove:

So there!
A few more minutes of quiet and private before I must leap up, greet Elisheva, and get the rest of supper finished.

Mommy called and said she wants to go see Eli after supper and break the news to him about Nanny. I said I'd drive down with her, because I keep offering to be helpful, and then I never am. I suppose raising the next generation is indeed helpful (see previous post about the hourglass), but not directly to her.

What my mother doesn't realize that Ted is working late ('till 8 p.m.) so I'm the only grown-up here. I will have to leave Elisheva in charge yet again and it will be a major shrieking event and chaos will reign before, during and after I go out... sigh... I'm already planning on leaving her with the littles during the funeral. YM says he wants to go. Should he miss a morning of yeshiva for a funeral in a Presbyterian church? Seems strange to me, but maybe right; I don't want to say no just yet, but I also don't plan to run it past his rebbe.

I wonder:
Were my siblings closer to Nanny?
I wonder why this isn't putting much of a dent in my week when it seems so devastating to everyone around me.
Maybe I'm numb? Maybe I'm just an awful person?
Maybe I'm at my limit already?
Answers welcome - as it seems this blog has a couple of misguided readers from time to time.

Maybe it's just that 96 is very old, she didn't feel good for a long time and this is better for her.

I am sad mostly because it's lousy timing for my mother; I was hoping caring for Nanny would keep her busy and help her feel useful, wanted, needed, loved. She even talked about maybe moving Nanny into the house with her sometime... I guess not now.

OK, supper-making time already. If I'm planning to go out later, things had better be at least a little organized around here. And the big kids are always happier if I'm up and puttering than sitting at the computer. Go figure.