Tribute to The Chair 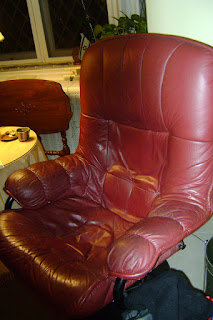 The chair is gone... it was actually gone over a week ago, I think.
This is the only place it exists now: well, here and I guess in some appreciative Freecycler's living room.

I didn't like the chair very much, and all of us hated the footstool. Being all frail and mushroomy at the base, it was never considered strong enough to stand up to the impact of anything besides my father's feet. We were not allowed to sit on it, lean on it - anything.

What an oppressive thing that footstool was.

I hope my mother told the new owner that the footstool is fragile. That it probably won't last.
That it only has so many LEANS in it (SITS on it?) before it gives out entirely.

And then they'll see he was right. They'll be sorry.

I advertised it as "leather-like" but my mother said it was mostly actual leather. I never saw real leather looking so tacky. 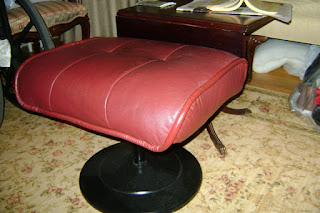 Deluxe: How Luxury Lost Its Luster

Ted & I went out after supper - date night!
We saw a movie: He's Just Not That Into You
Very cute film!
I liked it a lot, actually... I mean, it's a RomCom, which is my genre these days, and it sure didn't strain any brain cells. Ted picked it, knowing it was right up my alley. But it's so hard to do that kind of ensemble, and it really did seem to flow (mostly) smoothly.
So all in all a successful evening, even though there was nowhere to go before the movie started because of bloody Family Day and even WalMart being closed.

Yes, we had Nanny's funeral today. I don't want to talk about it just yet, but YM sang Mizmor l'David (Tehillim 23, Psalm 23 aka The Lord is my Shepherd) and it was beautiful. He did it all chassidishe, for some reason, with "oy" instead of "o" but his voice hardly cracked at all and I closed my eyes and thought of how much effort and love have gone into raising him and I cried because somehow, suddenly, it had so much to do with Nanny.

We all ended with a rousing (Nanny apparently asked for "swinging") rendition of This Little Light of Mine. I miss her light, I really do, even if I never visited.

There, I talked about it. Maybe more later on.