Surely the world owes me tomatoes?

Nanny died. She was 96; she lived almost 30 years longer than my father.

I left a message.
Apparently, that is NOT the normal human thing to do. The right thing to do, apparently, is to leave a message saying, "call me."
I hate messages that say nothing but "call me." I want to get to the point right away, even if it's brutal. Even if it hurts.
Apparently, not everybody is like that.

Anyway, Abigail told me off and then Sara called and told me off.
Talk about shooting the messenger.
And to be fair, I even left a message for Sara after the first message ("Nanny died this afternoon," said very nicely, I think, in an appropriate tone), saying "what a thing to hear from an answering machine." And then, because it had clicked through right away that second time, I called back a third time in case I could catch her before she got the message.

Anyway, at least I didn't email them the news.

And here's what I want now that the world owes me tomatoes: 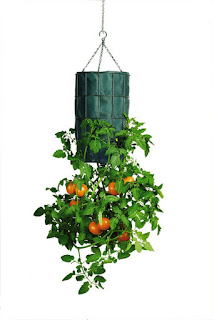 It's an upside-down tomato planter.

There are a few on the market now, but this one looks a bit more feasible because it has a built-in water reservoir.

Am I a terrible, terrible person for thinking about this when Nanny is gone?

Maybe I should just call it a day and go curl up in my nice, warm bed...
I have been sitting at this freezing computer for too long, fixing the printer and then figuring out some of YM's homeschool stuff.

The thermostat says 19 degrees, but there is NO WAY it's 19 degrees. My fingers are numb; my toes are chattering.

Supper was amazing, by the way.
But I guess that's trivial and I should focus on the important things... like tomatoes.