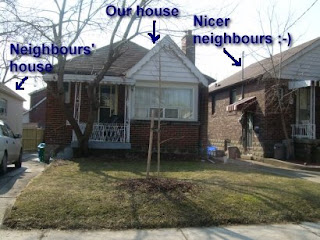 I have been speculating inappropriately about the nature of the neighbours' marriage. Can't help it, maybe... or maybe I can but choose not to. He's 80-something, Jewish, Canadian. She's 60-something, Vietnamese, claims to "looooove Jewishpeople" (all one word). She says "Love" in a way I have never heard it said without the words "you longtime." (see, I told you this was all pretty inappropriate)

So I wonder and then I think there is almost no way they could have met in the natural course of things. So I wonder if he sent away for her, which is a phrase my father always used - JOKINGLY, please! - when saying he'd made a mistake choosing my mother and would have done better for himself with an obliging mail-order Asian bride. He also occasionally - again, JOKINGLY! - had the endearing habit of referring to my mother as his "first wife." Guess she had the last laugh.

So I wonder if they met through some kind of service - he sponsors her to Canada, she takes care of him for the rest of his days and then gets to retire in his comfortable bungalow just south of Eglinton.

But then, I get a little Tevye in my head who says, "if that's not love, what is?"
Yes, she has complained often about how old he is and hard to take care of. But she's not abusing him; as far as I can tell, she's playing the part... when I went in last night, he was obviously being well taken care of. She goes to shul with him on Rosh Hashanah and Yom Kippur. She spent the last several weeks at his side in the hospital.

She refers to him by his first and last name, together. At first, the paramedics last night thought she was saying all one name (his last name is one of those ones that sounds like a given name -like he was some kind of hillbilly with a hyphenated name: Jim-Bob; Bobby-Frank. But she also remembered more or less his medical history, grabbed all his meds, remembered that he was on Metformin and pronounced it okay. It can't be easy in a new language, all of it.

So I guess it doesn't matter, either way. Nobody should live or die alone if they don't want to, and maybe in however-many years she'll have some nice Vietnamese (or not) husband to share her own old age with.

In the meantime, they just came home by AmbuTrans, I gave her back her keys, and she thanked me again. I'm glad he's (relatively) okay (for now).