I hit a car 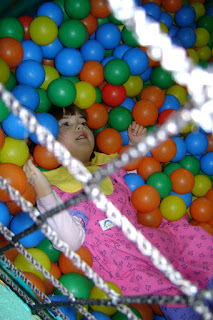 We had a lovely time at the ball pool and met up with Charlene and her husband and twinnies there - they're 19 months old already! :-o

I also had coffee with friend this morning. Such a nice thing! I picked her up at about 10:15, and then we talked for literally 2 hours. Amazing!

But yes, on Friday morning, after dropping Ted at work, I went to Superstore and in the parking lot I have no idea what I was doing, pulling forward to a better parking space, looking literally nowhere, I guess - the world was kind of out of focus and I did hear a distant beep beeping sound.

And then my car was in the middle of someone else's car and I was rushing out the door and telling them how sorry I was. Nice older Israeli couple with a brown Buick that I have solemnly vowed to repair on their solemn promise that they'd call me with the estimate without notifying the insurance.

I'm dead if it goes to the insurance.

We have no money to repair our own car, let alone someone else's car, but again, it'll be thousands upon thousands every single year if the insurance gets wind of it.

I really shouldn't be driving.

I keep saying it's just money, it's not the end of the world.
What the heck was I looking at, though?
I told the people in the car that I was distracted by the kids, but the truth is, the kids had been dead silent at the time. I wasn't looking at them, I wasn't turned around.

I was just staring at the world and not seeing it, like I was some kind of zombie.
Our car is fine, by the way. Stupid flimsy Buick, definitely all dented in, it's going to be some big repair, plus renting them a replacement car for three days or whatever it takes to fix it. Blah.

Gam zu l'tovah, right? This is all part of the plan for where our money is supposed to be going... into the pockets of the nice Roy Foss Pontiac Buick Repair Zone Folks.

I'm a total moron, but I have cute kids. I hope they will redeem me somehow, someday.