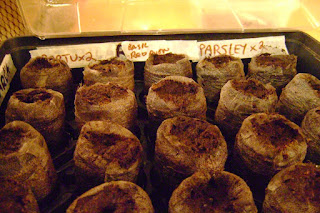 So I finally got off my tushie and started some seeds tonight!
At left, Portulaca x 10, Red Rubin Basil x 5, Parsley x 10.

The portulaca - if you've been reading carefully, you'll see I just ordered some on eBay and then today discovered a packet in the basement bought a few weeks ago in Home Depot (whoops!) - is for my mother, as I said before. She bought some in an annuals flat last year and just enjoyed them so much. They thrived (throve?) around the base of her doomed old oak tree, along with some lamium and a couple of stubborn hostas. And they flowered and flowered despite heat, damp, drought... everything. So I am growing them despite the fact that I really can't stand the way they look. And I can't stand mixed colours, for what that's worth. I hope she's grateful when I surprise her with them!

The basil will look nice if it does well, but the packet description does focus mostly on its distinctive look and calls the flavour "muted" or "subtle" - I forget which. Darn... I was looking for some nice basilly basil. I do have other packets, including lettuce-leaf, so I should probably start one of those also. I do like to have lots of basil; supposedly it's a Good Thing to grow with tomatoes.

The parsley is from last year's packet and it says flat-leaf Italian on the packet but I seem to recall it ALL came up curly and I had to run out and buy flat because the curly is a kashrus problem as well as being less tasty. If I am not completely mistaken AND they do that again this year, I am writing to MacKenzie Seeds and try to get a replacement packet or something. Now I'm worried. Anyway, they're all on heat now in the basement. 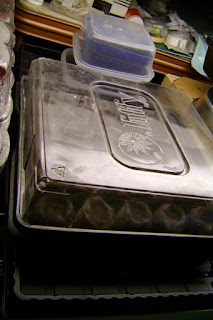 And what's that behind them in the picture???
I finally took a lonely mango seed that I was trying to sprout in a baggie that hadn't managed to die just yet (it had sprouted a root but no shoot) and laid it horizontally on soil in a nursery pot, covered with about an inch of soil... stuck an upside-down container over the whole thing, set it in a container on the heating pad with a Jobe stick in the soil (naughty, naughty). And hopefully the warm soil and reliable lighting will get some action going.

Oh - in the background behind everything: my sewing table and all my sewing stuff. Both sewing machines are broken, my children need new diapers sewn... I am the worst mama for not making more in so long. They need new woollies... everything.

Maybe I should sell the serger if I'm not going to use it. I could use the money to fix the serger - oh, no, I guess I couldn't. How "Gift of the Magi." 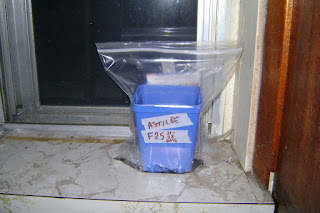 Finally, for tonight's burst of planting activity: Astilbe.
Yes, I ordered astilbe seeds on eBay the other day (I think!). Astilbe needs cold stratification, but the packet says to leave it at 16-21 degrees celsius until it germinates. That's about the temperature in our basement these days, so I just set it on the basement window ledge. Germination time is 21-28 days, so I don't even need to check it for 3 weeks... though it's true, I'll probably be peeking at it hopefully tomorrow morning!

{Okay, these are the same neighbours who have had a crazy-hate vendetta against us since we moved in, but I told her when I found out he was in the hospital that she could call me for anything at all, so I got to go over there and phone 911... I hope this means she'll let YM play basketball in our driveway this summer!}