But forget all this mushy stuff... I'm sure you are all wondering... 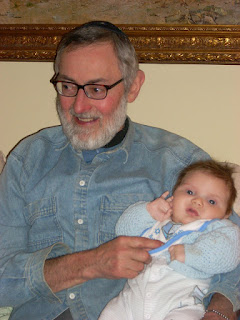 We are having chili.
With cornbread. Dunno whether I'm going to bake it on top since Naomi also wants baked potatoes.

So there it is: chili, cornbread, baked potatoes.

Nothing could be simpler.
Yes, this is a stupid photo of Gavriel Zev; that's why it didn't make it into the baby album. But it's a great shot of my dad, and the blue kind of coordinates. Plus, he looks totally fat in this picture compared to how gaunt he became in the last few months.
OK, they both look kind of fat in this picture. 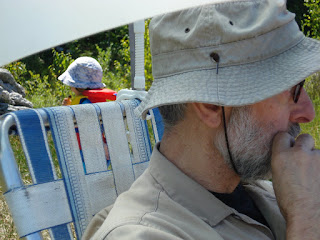 And the second picture is just nice because it's a moment, captured, kind of sneakily looking over his shoulder, and Naomi taking everything for granted and playing in the background.