Why is this pepper flowering - INDOORS? 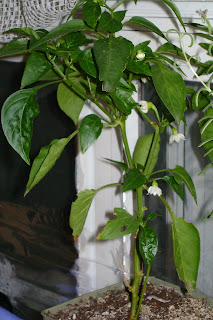 Here's the bell pepper I brought inside to overwinter. Sure, there are nibble marks all over the leaves, but she's also - in December! - flowering like crazy. I wonder if it's going to start making little peppers? It only produced three tiny stunted peppers in an entire summer in my nutritionally-deficient square foot garden... and now it's going crazy.

I think (but am not 100% sure) that this is one of the peppers I started from seed last March (?)... or whenever I started peppers from seed. 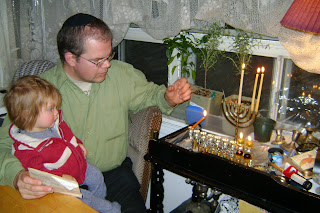 Here we all are lighting candles - second night. Less chaos and spanking tonight, thank goodness. But then Ted had to go out to his work Chanukah party, leaving us all alone to eat... 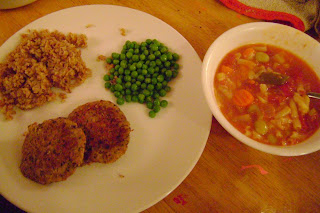 ~ Tuna patties (no eggs, so I used mayo and a seasoning pack that came from the egg marketing people and bread crumbs and the juice of half a lemon) - quite yum!
~ Multi-Veggie soup. Mostly frozen veg.
~ Bulgur "risotto" - stir 1 c bulgur in pan with 4 garlic cloves until it starts to smell fragrant (ie before it burns), add 2 1/4 c water, 2 tsp onion soupmix, bring to boil, turn down & simmer 20 minutes. Toss in some parmesan before serving and mix well; serve immediately, ie before the cheese makes it clumpy like it is here.
~ Frozen peas 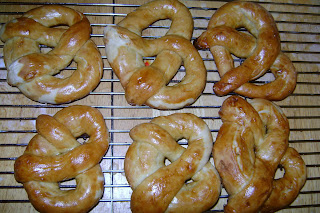 After supper, for a treat (for me!) I made (well, Elisheva did the initial mix, then wandered off to take a bath) the soft pretzels referred to in my last (?) post (recipe here). They were way easier than any other yeast dough I've ever made - four ingredients, 20 minutes' rise, quick dip and done!

No kneading; no boiling water like for bagels. In fact, I may use this as a "cheat" bagel recipe... loaded with poppy seeds after the dip, they'd probably pass for chewy Montreal bagels in a second.

Right now I'm supposed to be folding laundry, but the laundry is downstairs and Ted is out. The thought of carrying it up hurts - the baby was diddling with the scar during nummies before I noticed, just kind of scraping it back and forth with his fingers, and now it stings. I should probably rinse it with peroxide or something; who knows where his chubby little nailbeds have been?

This is me, getting up to schlep laundry. That way, I can sit on the bed and watch E.R. until Ted comes home. Fun, fun, fun!

Oh - we're going to a movie on Thursday (xmas) night. Sara's coming to babysit because she has 2 weeks off work. She seems sad. I was hoping she'd have a happy busy time at work preparing for xmas, then a couple of quiet weeks until she went back. But no, it seems like it's depressing before and maybe just no money coming in afterwards. Drat.