photo from the mall 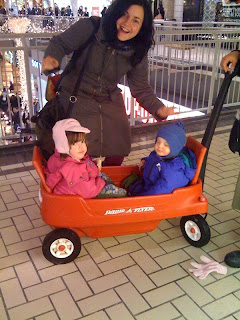 YM took this with a demonstration iPhone on Saturday night while we were downtown seeing the lights (and ducking into the Eaton Centre because the lights were outside in the bloody cold weather)... took him 10-15 minutes to set up his gmail account on there, take the picture, email himself the picture, delete his gmail account so nobody else could use it after he left.  The whole thing while I was pestering him to go, go, go because we had five people waiting for him.
But it's just a fabulous shot - just about the best photo of my sister I've ever seen.  The kids, whatever, but she looks like a model who's just dropped in from Above to uplift their spirits at this holiday season.  The juxtaposition is a little weird, but still... fabulous photo!
Makes me regret pestering him, but it was quite obnoxious standing around while he fiddled with the insufficient iPhone keyboard.
Maybe if I use the keyword iPhone a few more times, my blog will suddenly receive a ton of hits.
I'll become famous.
Famous enough to afford an iPhone to call all my other famous friends.
Oh, but wait.  I HATE using the phone.  So maybe I'll just pawn the iPhone and buy another filofax.
Or wristlet.  This thing (mine's Purple Paisley) has quickly become one of my all-time favourite things ever - it has made my life so compact and versatile, just as long as I don't lose it.
Did I mention I was off to do laundry?  Well, Sara called and interrupted my good intentions.  But now I have to go.
Oy... My mother said something about Sara today that she then turned around and said, "maybe I wasn't supposed to tell you that."  Because it was clear that I hadn't known until she told me; maybe I sounded surprised or something.  It isn't a terrible thing.  But now I have this heavy burden of knowing when I talk to Sara that I think, "she doesn't want me to know."  And I want to tell her I know just so she doesn't have to hide it.  But what if she isn't hiding anything?  Like I said, it isn't a terrible thing, or even maybe a BIG thing, and maybe she just didn't mention it because, well, we were talking about other stuff?
I definitely need more real-life friends to take my mind off my family.
Maybe then I'd have someone to call when I finally buy my iPhone.
<3 J